Japan’s Minister of Defense, Naoki Tanaka, is pressuring the government to introduce legislation that will restrict the purchase of land by foreign corporations and individuals in the Henoko area in Naga City, Okinawa. Henoko is home to Camp Schwab and is the proposed site of a new US Military air base, which will replace the Futenma Airfield in Naha. 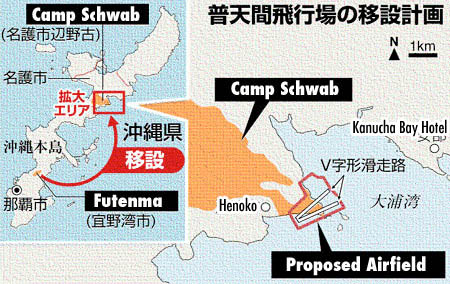 Itsunori Onodera, member of the Liberal Democratic Party, said that foreign buyers were already planning to purchase resort land on or surrounding the Kanucha Bay Hotel and Villas, directly across the bay from Camp Schwab.  The main concern is that the foreign owners may pose a hindrance to the future development of the American base nearby. President Takeharu Shiraishi of the Kanucha Bay Resort denied that they had entered into any negotiations with foreign buyers.

While most hotel and property owners would be strongly opposed to a major military air field opening up a few kilometers away from their resort, Shiraishi seems to have a vested interest in seeing the relocation go ahead as planned. According to Wikileaks cables, Shiraishi is a close advisor and financial supporter of Okinawa Govenor Nakaima. Shiraishi had dinner with former Nago City Mayor Tetsuya Higa and former Consul General Kevin Maher in 2007. Both Shiraishi and Higa made it clear that Nago City would accept the Futenma relocation plan.

If a foreign corporation was to buy and develop a resort in the area, they would oppose the construction of the new air base and could create a headache for local government.

While there is an old alien land law from 1926 that was enacted to restrict the foreign ownership of land that is considered essential to Japan’s national defense, the government ordinance that designated the off-limit areas was abolished after WWII. The Minister of Defense said that the government needs to enact a new ordinance under this law, or create new foreign land ownership regulations. However, Chief Cabinet Secretary Osamu Fujimura said that the government is not currently considering introducing any such laws.

If land purchases can be restricted, the base relocation can go ahead with fewer obstacles as some of the large landowners, such as Shiraishi, support the idea.