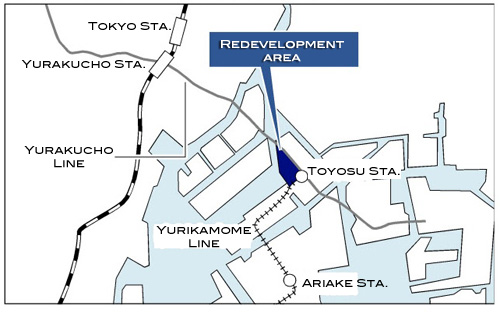 Mitsui Fudosan will be embarking on a large-scale redevelopment of Koto-ku’s Toyosu area from next year. The 100 billion Yen (1.3 billion USD) project on one of Tokyo Bay’s reclaimed islands will cover a 47,400 sqm site. The project will include two high-rise office buildings (31 and 22 stories) as well as retail facilities. Due to the nature of the site, measures will be taken to strengthen the ground against liquefaction and the building will be built using “seishin” (vibration-control) construction. Completion is scheduled for 2016 and Mitsui Fudosan will be contributing 90 billion Yen in capital.

Despite most real estate developers avoiding the manmade islands in Tokyo Bay like the plague following the liquefaction damage caused by the March 11 earthquake, Mitsui Fudosan believes that if the safety of the land can be assured, then demand will return to these areas. A big if.

Other new developments nearby in the Shinonome and Ariake areas include high-rise apartments with sales scheduled to start in the fall of 2011. If demand does recover, other large-scale redevelopment projects in the Harumi area may also start to speed up. In recent years, many residential buildings have gone up in the area including Park City Toyosu, The Tower Toyosu, City Towers Toyosu as well as the Lalaport Shopping mall.

As you can see from the aerial photo taken in 1974, these islands were bustling with heavy industry. Most of the factories have since been demolished, but high contamination levels remain in the soil.