The government is looking at adjusting the tax calculation methods for apartments to allow for some consideration to be given to floor height. Although details have yet to be ironed out, current discussions suggest that the new tax methods may apply to brand-new apartment buildings over 60 meters tall (approx. 20 storeys and above).

END_OF_DOCUMENT_TOKEN_TO_BE_REPLACED 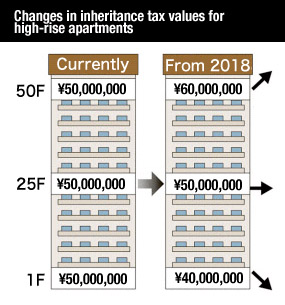 The National Tax Agency and the Ministry of Internal Affairs and Communications are considering introducing changes to the tax valuation of apartments in high-rises to counter-act a growing trend of wealthy Japanese buying up apartments on high floors to reduce their inheritance taxes. Changes could be introduced from as early as 2018.

When calculating inheritance taxes, assets such as cash and shares are valued based on their face value, while real estate is valued based on its ‘rosenka’ tax value which can be much lower than the actual market value.

For apartments in a high-rise building, the tax value is currently based on both the size of the apartment and the rosenka value of the small share of land. Tax values do not take into account the floor, views or facilities, so an apartment on the 2nd floor would have the same tax value as an apartment on the top floor, assuming they are the same size. The top floor unit, however, has a market value much higher than the lower floor unit.

END_OF_DOCUMENT_TOKEN_TO_BE_REPLACED

The Osaka Regional Taxation Bureau has identified approximately 50 landlords of rental properties in Kyoto that failed to report over 300 million Yen (2.55 million USD) in rental income over a three year period.

From 2014, approximately 50 landlords of rental apartment buildings and the smaller ‘apaato’-type flats located near the Doshisha University campus were the subject of an investigation by the Kamigyo Tax Office. The investigation found that the majority of the landlords had failed to correctly file and declare taxes.

END_OF_DOCUMENT_TOKEN_TO_BE_REPLACED

Japan’s National Tax Agency is calling on local tax offices to enforce stricter checks with regards to the purchase of high-rise apartments by wealthy individuals as a way of reducing their inheritance tax burden.

The inheritance tax charged on real estate is calculated based on the taxation value of the property rather than the market value. For apartments in high-rise buildings, the taxation value can be considerably lower than the actual market value because the land ownership share is usually quite small. The value of the apartment itself is also based on the size of the apartment and does not take into account the finish of the interior, whether it is on a high or low floor, nor the building facilities and services.

END_OF_DOCUMENT_TOKEN_TO_BE_REPLACED 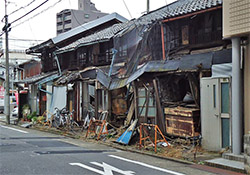 From February 28, 2015, the Act on Special Measures Concerning Vacant Houses will go into effect. This law has been designed to help reduce the number of abandoned homes across the country. Such homes pose fire and hygiene hazards, can invite crime and can be a general blight on the neighbourhood.

Under this Act, a local government can designate an abandoned and deteriorating property as a risk to the environment, and thereby make the property owner ineligible for the fixed asset tax deductions that would otherwise apply. In some cases, local governments may have the right to forcibly demolish the building.

In the 1970s, tax breaks were introduced to help ensure a steady supply of housing at a time when there was a housing shortage. Under this tax scheme, the annual fixed asset tax on residential land was reduced to a 1/6th on the first 200 sqm, and 1/3rd for the portion over 200 sqm, provided there was a house on the land.

Naturally this made it much more cost effective to leave a dilapidated and inhabitable structure on land that the owner had no current plans for, since removing the house could result in their tax bill increasing six-fold. For example, an annual fixed asset tax bill of 80,000 Yen would become 480,000 Yen.

END_OF_DOCUMENT_TOKEN_TO_BE_REPLACED 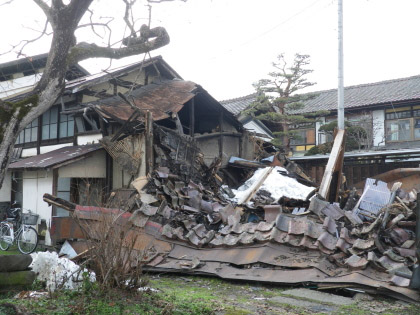 The Japanese government is considering a revision to the fixed asset tax code in order to encourage the removal of dilapidated and abandoned homes.

Currently, the annual fixed asset tax on land is reduced to a sixth of its original level if there is an existing house on the land. This reduction was introduced in 1973 when Japan was going through a period of rapid growth as a means to encourage the conversion of agricultural land into housing. The reduction also applies to empty houses, so demolishing a house would mean a higher tax bill.

END_OF_DOCUMENT_TOKEN_TO_BE_REPLACED

Japan’s inheritance tax rate is set to increase from January 1, 2015. Under the current tax rate, approximately 4% of households are subject to inheritance taxes, but the decrease in the standard deduction from 2015 is going to affect a lot more households.

Wise investors are seeking alternative ways to store their fortune, with high-rise apartments in central Tokyo becoming a popular option.

END_OF_DOCUMENT_TOKEN_TO_BE_REPLACED

Toshima-ku in Tokyo announced that they will extend the special tax on builders of studio or ‘one-room’ apartments for another five years.

The tax applies to buildings with 9 or more apartments that are less than 30 sqm (323 sqft) in size. A construction company must pay a tax of 500,000 Yen on each studio apartment within two months of the commencement of construction.

END_OF_DOCUMENT_TOKEN_TO_BE_REPLACED

The government is considering extending the fixed asset tax reduction on new homes for another two years. Currently, the annual fixed asset taxes are halved for the first 3 ~ 5 years on new homes and apartments. Unless extended, the special tax relief measure is set to expire at the end of March 2014.

There are concerns about a slump in new home sales following the planned increase in consumption tax from April 2014. As a result, the government is looking at measures to counter-act any possible downturn in sales activity.

END_OF_DOCUMENT_TOKEN_TO_BE_REPLACED

Japan’s National Tax Agency has discovered that 10 Australians have neglected to pay capital gains tax on the sale of real estate in Hokkaido’s Niseko area. Approximately 56 million Yen (570,000 USD) in tax is owed, with an additional 14 million Yen (140,000 USD) in penalties.