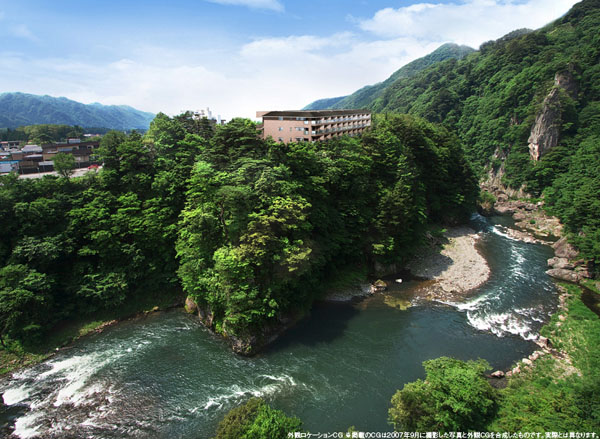 The Kinugawa River Side Residence will be the first condominium to be built in Nikko’s Kinugawa onsen resort area in almost 20 years.

It hasn’t been a smooth journey for this particular development. The original developer – Zephyr – had completed construction up to the 3rd floor before filing for bankruptcy in July 2008. The bare concrete structure sat empty for the next five years until Yokohama-based developer Daiwa Jisho Group purchased the building and land and resumed construction in May 2013.

Already 16 of the 25 apartments initially offered for sale have sold. Many of the buyers were from the Tokyo area and in their 60s.

The apartments are a 9 minute walk from Kinugawa Onsen Station, which is 2.5 hours by train from Shinjuku.

Many of the existing hotels and resorts in Kinugawa were built during the bubble era or earlier and are now ageing. Some have been abandoned and left to rot. Lee from The Tokyo Times has posted a great selection of photos inside some of theses abandoned resorts overlooking Kinugawa River here.

While a new development is good news for the area, a lot more is needed to reinvigorate the neighbourhood.

Many of Japan’s former booming resort towns are still suffering after the crash of the bubble in the early 1990s and are showing no signs of recovery. Nakagami in Okinawa and Karuizawa in Nagano are two of the few spots that have seen a revival.

The reason for the large disparity in prices is due to demand. The majority of buyers of resort apartments are retirees. As such, they generally prefer a slow-paced hot spring area with a nice climate over one that is primarily ski-oriented.