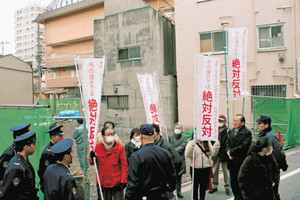 Local residents and parent-teacher-association members in Asakusa, opposed to plans for a new 13-storey condominium, have delayed the construction after protesting outside the building site. As trucks carrying construction equipment neared the site on the morning of March 1, they were met by 30 protestors blocking the entrance. The police soon arrived to assess the situation.

The construction site adjoins the Asakusa Elementary School in Hanakawado 1 Chome and is approximately 200 meters north of the Tobu Asakusa Station. Two-thirds of the apartments are studio-type rooms and many will look directly over the neighbouring school’s classrooms and swimming pool. The group want the developer to change the building design to enclose the common hallways and include more family-type apartments, and less studios.

Residents and PTA members have obtained 4,000 signatures supporting a change to the building design and have submitted it to the developer.

Taito-ku have offered to provide mediation, but the developer has not responded to their request. If the mediation is unsuccessful, the local ward can recommend specialist arbitration. If no agreement is reached, then it may lead to a civil trial.