Japan is a seismically active country and has some of the most rigorous earthquake building standards in the World.

Although building codes are updated regularly, a major change to the building standards act occurred in 1981. Buildings built to the pre-1981 standard are called “kyu-taishin” and buildings built to the new standard are called “shin-taishin“. This is a very important distinction to many Japanese looking to purchase an apartment. The recent Magnitude 9 Tohoku earthquake has brought earthquake building codes to the forefront of many buyers’ minds. Demand for shin-taishin buildings is expected to rise.

Timeline of changes to building standards:

– 1950: The introduction of the Building Standards Act and what is now known as “kyu-taishin”.
The change was brought about after the 1948 Fukui earthquake which had a magnitude of 7.1. Earthquake resistant design was enforced nationwide and no longer limited to just town areas. A certain amount of earthquake load bearing walls were required. Extra framework was required for wooden structures.

A building is designed to withstand and not collapse in an earthquake of magnitude 5~7 and with a seismic intensity scale (Shindo-scale) of upper 5, although some damage may be sustained.

However, no standards were enforced in the event of a larger earthquake that produced a seismic intensity of 6 or higher.

-> 1981: The “shin-taishin”, or New Earthquake Resistant Building Standard Amendment.
Damage from the 1978 Miyagi Earthquake with a magnitude of 7.4 led to this new revision. The earthquake resistance definition is as follows:

-> 2000: Revision to improve earthquake resistance for wooden structures.
Prior to building a wooden framed house, the ground must be tested for stability and the structure above must be built to suit the ground type. Extra regulations applied to braces, foundations and beams of the structure.

-> 2000: Introduction of the 10-Year Warranty Against Defects.
New houses must include a 10 year warranty against defects.

-> 2006: Building certificates and inspections became stricter.
This amendment was made after the forged earthquake resistance data scandal by Aneha in 2005. Buildings above a certain height were subjected to peer reviews. Apartment buildings over 3 stories now require inspections in the middle of the construction process.

Under the kyu-taishin building codes, a building is designed to withstand and not collapse with a seismic intensity scale (Shindo-scale) of upper 5, although some damage may be sustained. To put that in perspective, the 1923 Great Kanto Quake and the 2011 Tohoku Earthquake produced a Shindo-scale of upper 5 for Tokyo. The Tokai Earthquake, which is long overdue, is expected to have a seismic intensity level of upper 5 for Tokyo.

The Tohoku Earthquake produced a Shindo-scale of lower to upper 6 for Sendai City. Several kyu-taishin buildings in Sendai suffered serious damage as the seismic intensity exceeded what the buildings were designed for.

Some buildings have undergone an analysis (taishin-shindan) to compare the structure to the current building methods. Older buildings may be retrofitted to bring them up to code, but can be costly. The cost for this work is taken out of the building repair fund, but if the funds are insufficient, then apartment owners will be forced to bear the extra costs. Obtaining agreement from apartment owners for expensive work is not an easy process. Due to the 2011 earthquake, experts were predicting that monthly repair fund fees for kyu-taishin buildings would need rise in order to carry out extra earthquake strengthening work.

There are three types of earthquake-resistant shin-taishin construction methods: 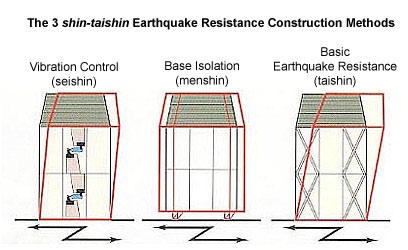 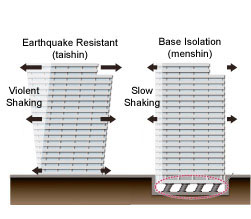 The biggest and most well-known scandal to date was forgery of construction data by architect Hidetsugu Aneha. Hotels and apartment buildings built well below the minimum building standards. Properties built with falsified data were at risk of collapsing in an earthquake with a seismic intensity of upper 5. This included many of the “Grand Stage” series of apartments. Many of the buildings have since been demolished.

Wikipedia has a page about architectural forgery in Japan.

Sumitomo has also been in the news when a condominium in Sapporo did not meet building standards.

Sumitomo Realty & Development Co was ordered to return about 370 million yen to 14 people who bought 11 units in a defective condominium building in Sapporo, Hokkaido.

The contracts were invalid as both the seller and buyers misunderstood that the building was constructed based on the Building Standards Act.

The company had claimed that the building, whose earthquake-resistance strength was 86% of the standards, could be reinforced through additional construction and the data were not so faulty as to annul the sales contracts.

To both developers and buyers, earthquake resistance is a matter of cost vs. safety. To a buyer, if size is a priority then a pre-1981 apartment will usually be cheaper per square meter. If safety is a priority, then the buyer may have to sacrifice size for safety.

There may be cases where a building built before 1981 may be just as strong as one built to the newer building codes. There are also cases, as explained above with Aneha and Sumitomo, where a new building may not be built up to code.

Even if a building was completed in 1982 it may not necessarily be built to the new codes, especially if construction began many years prior. If you are concerned, ask the seller or real estate agent to confirm whether the building is kyu-taishin or shin-taishin.

Many of the changes to the building standards act over the years were made after significant earthquakes, so we may see some additional amendments introduced in the future.