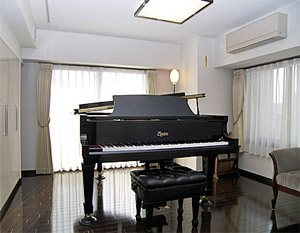 Q) Can I play a musical instrument in my apartment?

A) As a general rule, musical instruments are not allowed to be played in multi-unit dwellings, such as apartments. Even if a rental contract does not specifically mention musical instruments, there is usually a clause that prohibits bringing any items that may cause noise and be a nuisance to neighbours. This clause generally applies to musical instruments, including pianos, drums, guitars, trumpets and so on.

Musical instruments, such as digital pianos, that can be played using headphones to reduce the sound are also generally not allowed. Although they are thought to be quiet, the keys and pedal can make noise when pressed. This noise can transfer through floors and walls and can often lead to complaints from neighbours.

How to find an apartment that does allow musical instruments

The number of properties that allow musical instruments is very limited. If they are allowed, then it will usually be mentioned in the property advertisement. Make sure you also inform the real estate agent so that they can show you the right properties.

Apartments with private landlords are usually a little easier to obtain permission to play an instrument. You can also try looking for properties located near musical colleges and universities with a music department.

There may be limitations on the type of musical instrument allowed, so make sure to check before signing a contract.

Once you have found the right property, be aware that music is only allowed to be played between the hours of 10am and 8pm.

If there is no clause in the contract, you will still need to check with the building management company and your landlord.

Most apartments have inadequate soundproofing, so to avoid trouble you may wish to purchase acoustic insulation products from a home building center. Prices for soundproofing sheets and carpeting start at 10,000 Yen each, and paneling which can be placed behind a piano is priced at around 50,000 Yen each. Even after soundproofing, you should stop playing music after 8pm to avoid any trouble.