On March 29, the Tokyo Metropolitan Government released data from earthquake resistance inspections on public buildings built to the old ‘kyu-taishin’ earthquake codes (pre-May 1981). A total of 251 kyu-taishin buildings, representing a third of the total, were determined pose some risk of collapse in the event of an earthquake producing a seismic intensity scale (shindo) of a 6-upper or above. Of those, 156 were found to be at high risk of collapse.

The publication of this data is the result of a revision to the Act for Promotion of Renovation for Earthquake-Resistant Buildings that was introduced in November 2013. Under this revision, public buildings used by an unspecified number of people, such as hotels and commercial facilities, with a floor area over 10,000 sqm and built to the old kyu-taishin earthquake codes are obligated to carry out earthquake resistance inspections, the results of which are made public. This also applies to old buildings located alongside emergency roads. Although the revision requires building owners to carry out inspections, there are no obligations or requirements to conduct the retrofitting.

END_OF_DOCUMENT_TOKEN_TO_BE_REPLACED

The Tokyo Metropolitan Government is considering introducing regulations that would relax floor-space ratios when redeveloping old apartment buildings in the city. This would allow for the additional space to be sold by a real estate developer, which would help to cover the costs of redevelopment.

The target of the revision is condo-style apartment buildings that were built to the old earthquake codes (kyu-taishin). The major change to earthquake codes occurred in May 1981, with buildings built after this date meeting the current codes. Due to the time period from construction to completion, there are some buildings from 1982 that may have been built to the old ‘kyu-taishin’ codes.

END_OF_DOCUMENT_TOKEN_TO_BE_REPLACED

On September 30, the Japanese government voted in favour of enacting an exemption to the apartment redevelopment law in order to help speed up redevelopment of buildings damaged by the Kumamoto earthquake in April. Under the special exemption, the voting ratio for demolishing an apartment building and selling the land has been reduced to 80% for damaged buildings in Kumamoto. This is the second time the exemption has been applied. It was first applied to three buildings damaged by the 2011 Tohoku disaster in Sendai city.

Ordinarily, 100% of apartment owners must agree before a building can be demolished and the land sold. However, if the building has been seriously damaged in a major earthquake, the ratio can be reduced to 80% if certain conditions are met. Nevertheless, obtaining 80% agreement is still a difficult task.

According to Kumamoto City, 19 apartments buildings were considered to be completely destroyed, 21 suffered major damage, and 52 suffered partial damage in April.

END_OF_DOCUMENT_TOKEN_TO_BE_REPLACED

On July 4, Nagoya City released details on 50 city-owned buildings across the city that face a high risk of collapse in an earthquake producing a seismic intensity (shindo) level of 6+ or above. All 50 buildings were built before the 1981 change in earthquake-resistant construction methods. 45 of those buildings are public housing complexes which are home to as many as 2,500 households.

END_OF_DOCUMENT_TOKEN_TO_BE_REPLACED

Nowadays Japan has some of the most rigid earthquake codes, however that wasn’t always the case and older buildings may be more susceptible to earthquake damage than some buyers realise.

Choose a property on solid ground.

Properties on reclaimed land, flood plains, former lakes, ponds, riverbanks, rice fields, or marshes are more susceptible to collapse and tilting from liquefaction. Even newer homes may not be protected from the danger of being built on soft soil.

Choose a property built after June 1981.

END_OF_DOCUMENT_TOKEN_TO_BE_REPLACED

Zones are based on data supplied by the Tokyo Metropolitan Government. The local government has provided this data online for several years, but the link up with Google Maps has provided a much easier user interface.

END_OF_DOCUMENT_TOKEN_TO_BE_REPLACED

A recent estimate by a  government panel in late 2013 reported that a magnitude-7 earthquake directly under Tokyo could destroy as many as 610,000 buildings in Tokyo and the neighbouring three prefectures. 70% of the affected buildings could be destroyed by fires that quickly spread through densely packed neighbourhoods.

Many of the Olympic events are centred around the islands in Tokyo Bay. While they may be spared from the risk of fire due to the open space, these man-made islands can suffer damage from liquefaction and are even at risk of being submerged by a tsunami. A working group from the Cabinet Office’s Disaster Management Group are requesting that urgent measures be taken to reduce the risk of any damage and to make sure that the Olympics can be held without disruption.

END_OF_DOCUMENT_TOKEN_TO_BE_REPLACED

The revision to the law to promote earthquake-resistant repairs to buildings went into effect on November 25. This revision obligates the owners of large-scale buildings such as hotels and other institutions to undertake earthquake-resistant building inspections, of which the results will be made public. It also applies to buildings alongside designated major roads. In the event of a major earthquake, there is a risk that older, unsafe buildings could topple onto roads and block access for emergency service vehicles.

So what does this mean for apartments in ageing buildings?

END_OF_DOCUMENT_TOKEN_TO_BE_REPLACED 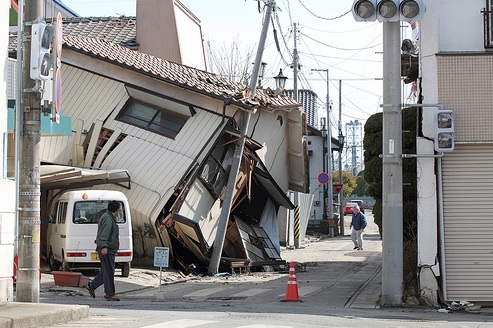 Earthquake insurance premiums on households are expected to rise by an average of 15.5% from July 2014. The reason for the increase is due to the growing risk of another major earthquake. Also, the insurance industry saw a surge in payouts following the Tohoku earthquake which has drained the reserve fund.

The average annual premium on a concrete or steel-framed residence with 10 million Yen coverage in Tokyo would increase from 16,900 Yen to 20,200 Yen. In disaster-hit areas in Iwate and Fukushima Prefectures, premiums may rise by as much as 30%. Meanwhile, some areas such as Yamagata Prefecture may see premiums fall.