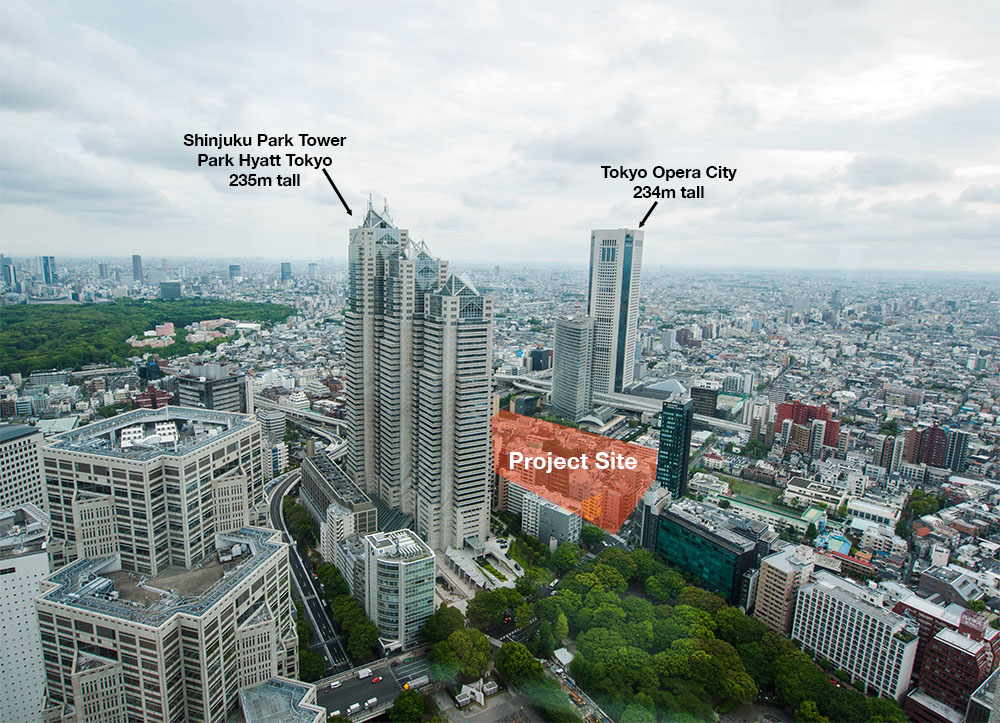 Nomura Real Estate Development, Tokyo Tatemono and two other developers are preparing to embark on one of Japan’s largest residential developments. Two 235-meter tall, 65-storey apartment buildings are planned for a site on the edge of Shinjuku’s bustling business district. The two towers will contain a total of 3,200 apartments.

Construction is scheduled to start in 2019, with completion by 2026. When complete, the two towers will be the tallest residential buildings in Japan based on floor count, and the largest development based on total apartment count.

The 200 billion Yen (1.85 billion USD) development will be located across the street from Shinjuku’s Park Hyatt Hotel and just south of Shinjuku Central Park. The 5-hectare site is currently home to densely packed and ageing residential and office buildings. With the completion of this project, the population will increase from its current level of around 1,000 residents to over 10,000 residents by 2026.

Sale details have yet to be announced. The average price of a new apartment in Mitsubishi’s nearby 60-storey condominium was around 61 million Yen (563,000 USD). Nomura believes that there will be enough demand from buyers to support the large number of units in this project, and also believes that demand will be strong following the 2020 Olympics for projects that are located in central Tokyo and close to train stations.

Until now the tallest residential building in Japan based on floor count was the nearby ‘The Parkhouse Nishi Shinjuku Tower 60’ which is currently under construction. The 208.97-meter tall building will have 60-floors when completed in 2017.

The largest condominium project in Japan to date has been The Tokyo Towers located in Tokyo’s bayside area. The two-tower project was completed in 2008 and contains 2,800 apartments.