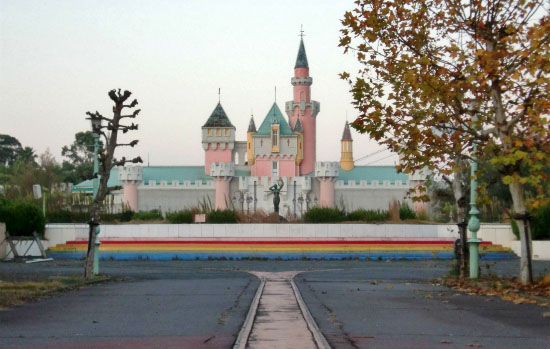 Before Tokyo Disneyland there was Nara Dreamland – a Disney-themed park in Nara Prefecture that closed in 2006 and has since become a popular spot for urban explorers. Due to unpaid property taxes, Nara City is planning to put the property up for public auction soon.

Nara Dreamland was opened in 1961 by Nihon Dream Kanko. After meeting with Walt Disney at California’s Disneyland Park,  Nihon Dream’s president Kunizo Matsuo expressed a desire to build a similar theme park in West Japan to cater to Japanese. Disney was apparently okay with this idea and sent some experts to Japan to advise on park design. While Nihon Dream claimed to have a franchise agreement in place, Disney later denied any official affiliation as they could not come to an agreement on franchise fees.

When Oriental Land entered into negotiations with Disney to open Tokyo Disneyland in 1983, they initially had some difficulty gaining Disney’s trust due to the problems experienced in Nara.

Nihon Dream was acquired by supermarket chain Daiei in 1993. Daiei later sold the park and operating rights to ‘Dream Park’ who then sold it to a company called ‘Dreamland’.

At its peak, Nara Dreamland was attracting up to 1.6 million visitors a year. Competition from Tokyo Disneyland and Osaka’s Universal Studios Japan led to a drop in park visitors, and the park only received around 400,000 annual visitors before its closure in August 2006.

The 32-hectare park is currently under the management of a company called ‘Dreamland’. They owe approximately 650 million Yen in taxes. The city had plans to purchase the site from Dreamland and build a crematorium, but local residents were opposed to the idea. Dreamland claim that the city had also discussed a reduction on their fixed asset taxes.

Urban explorer and author Michael John Grist has a great selection of photos from a visit in 2010, as does Florian from Abandoned Kansai.