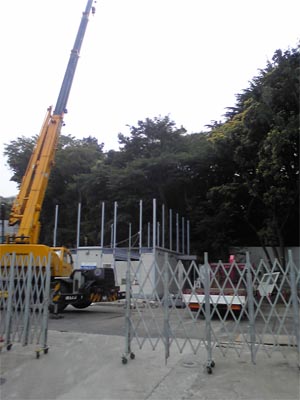 The 4000sqm site of the former French Embassy in Minamiazabu 4 Chome is about to be redeveloped into a luxury 7-storey condominium apartment complex.

The developers are Mitsui Fudosan Residential and Nomura Fudosan and the construction company is Takenaka Corporation. Nomura will act as the sales agent. The project is currently called the “French Embassy Site Minamiazabu Project” but the final building name may be “Proud Minamiazabu”, which will be the latest in Nomura’s “Proud Series” of apartments.

The apartment building will be 7-stories with 1 basement and will have 88 apartments. The apartments will range in size from 68.84 ~ 192.55sqm so it looks like they are catering to high-end buyers.

The completion date is unknown, but apartments are expected to be ready to move in to by late August, 2013.

The land was purchased by the French Embassy from the Japanese Government in 1972. The land will be subleased by the Embassy, so the apartments are NOT freehold. Land ownership for the new apartments will be under a 50-year fixed term leasehold which is not renewable. At the end of the 50 year term, the building must be demolished and the vacant land returned to the landholder with no compensation to apartment owners.

Construction was initially scheduled to begin in February, 2010 and be completed by March, 2012, but was delayed. The initial plans were for 50~60 apartments ranging in size from 160 ~ 200sqm. This would have been a very high-end development, but given the Lehman Shock in 2008 and the March 11 Tohoku Disaster, the sluggish economic conditions could not warrant developing such an extravagant building. It looks like the developers have had to downgrade their plans and downsize the apartments slightly.

The site is approximately 6 minutes from Hiroo Station and 5 minutes from Arisugawa Park. The Minamiazabu 4 Chome area is a very high-grade residential area with several Embassies, Ambassador Residences and other large private homes and low-rise luxury apartments.