Sales in a high-end condominium in the heart of historic Kamakura City are scheduled to start in late August. The Parkhouse Kamakura is a 5-story luxury condo currently under construction alongside Wakamiya-Oji Avenue which leads up to the Hachimangu Shrine. It is the first condo to have been built within a 5-minute walk of Kamakura Station in the past ten years. This is also the first condominium developed by Mitsubishi to feature their full, underfloor central-air system.

END_OF_DOCUMENT_TOKEN_TO_BE_REPLACED

Let’s take a look at several traditional Japanese homes currently listed for sale in Kamakura. This popular beachside city is just 48 minutes by train from central Tokyo and 25 minutes from Yokohama, making it relatively commutable for city workers. It’s also an appealing destination for weekend visitors and holiday-home owners.

The pace is decidedly laid back, with lush green mountainside, sandy beaches and surf, traditional streetscapes, temples, shrines, and the 700+-year-old Great Buddha.

END_OF_DOCUMENT_TOKEN_TO_BE_REPLACED

On October 9, the Kanagawa Shimbun newspaper reported that the former residence of author Jiro Osaragi (1897-1973) in Kamakura is for sale. The 100-year old traditional thatched roof house is designated by the city as an important scenic structure. The owners are hoping to find a buyer that will continue to preserve the culturally significant and historic home.

END_OF_DOCUMENT_TOKEN_TO_BE_REPLACED

Kamakura City is considering introducing an ordinance that would allow owners of historic buildings to bypass some of the regulations under the Building Standards Act that normally apply for renovations, extensions and changing the use of a property.

When making structural additions or alterations to older buildings, it can be very difficult to make the building comply with the Building Standards Act while still retaining the original features. In many cases property owners simply give up and either rebuild or leave the property to deteriorate. As a result, the neighbourhood begins to lose its character over time as the older properties are demolished.

END_OF_DOCUMENT_TOKEN_TO_BE_REPLACED

Located between the mountains and sea, Kamakura is an ancient city located 50 km south of Tokyo. The city came to prominence in the 12th century when it was home to the Kamakura Shogunate. Unlike some of the more urban cities in Japan, Kamakura has retained much of its traditional character. The city is characterised by its traditional streetscapes, numerous temples and shrines, and lush mountainside. In fact, 40% of the city is forest and greenery.

Nowadays, much of this character is preserved through numerous strict building and zoning codes enforced by the city, along with efforts by local residents.

END_OF_DOCUMENT_TOKEN_TO_BE_REPLACED

The owner of the historic Murakami Residence in Kamakura’s Nishimikado neighbourhood is preparing to donate the residence and land to the city. Based on the land size, the property would have a market value of approximately 420 million Yen (approx. 4 million USD).

Although official records have been lost, the traditional Japanese house is estimated to have been built sometime prior to 1939. In 1941 the residence was acquired by Chosuke Murakami. The house was later inherited by Murakami’s wife, who, prior to her passing in 2014, had requested that the house be donated to the city. She also made arrangements to leave 10 million Yen (97,000 USD) in cash to go towards the maintenance of the property.

END_OF_DOCUMENT_TOKEN_TO_BE_REPLACED

There are very few chances in a lifetime to buy a modernist home in Japan, and opportunities are going to become even more limited in coming years as these homes are gradually demolished by their owners. Although most are sold for land value with little to no market value placed on the structures themselves, these homes are irreplaceable.

Two homes by modernist architect Yoshimura Junzo are currently on the market in Kanagawa Prefecture (Update: Both have since sold). One is an oceanfront home just south of Hayama, and the other is a mountain-top home in Kamakura.

END_OF_DOCUMENT_TOKEN_TO_BE_REPLACED 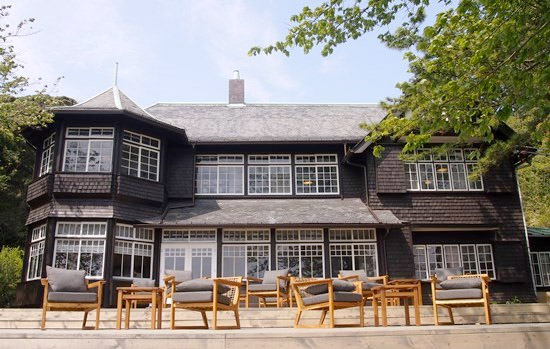 A historic residence in Kamakura that was once the holiday home of former Prime Ministers Fumimaro Konoe (1891 – 1945) and Osachi Yamaguchi (1870 – 1931) has been repaired and converted into a French restaurant and wedding function centre. This historic, privately-held home had been closed to the public until now.

The Koga Residence was built in 1916 as a villa for Seijiro Sho (1862 – 1926), the managing director of Mitsubishi. In 1937 it was purchased by Mr. Koga, a manager of Nippon Tochi-Tatemono, and has been in the Koga family ever since.

END_OF_DOCUMENT_TOKEN_TO_BE_REPLACED

One of Japan’s exemplary models of modern architecture – the Museum of Modern Art, Kamakura – now stands a chance at being saved from demolition after a recent structural analysis found that it could be reinforced against earthquakes.

The Kanagawa Prefectural Government is also in discussions with the landowner, the nearby Tsurugaoka Hachiman-gu Shrine, to seek an extension to the land lease.

In late 2013, it was reported that the prefecture decided against renewing the lease due to the high costs of maintaining the buildings and the anticipated costs of retrofitting. The prefecture announced plans to close the museum at the end of March 2016. Under the terms of the lease, any buildings were required to be demolished before returning the land to the Shrine.