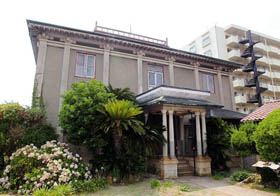 The final bid to save the former Jonas Residence in Shioya, Kobe, from demolition has failed after the possible buyer backed out of discussions.

In late September a renewable energy-related company began negotiations with the seller – developer Anabuki Kosan – to purchase the historic house and land. Unfortunately the two parties could not come to an agreement on the sale price and the buyer walked away from the deal on October 10.

END_OF_DOCUMENT_TOKEN_TO_BE_REPLACED

The 94-year old Jonas Residence in Kobe may have been saved from demolition as a renewable energy company have entered into negotiations to purchase the property at the eleventh hour.

Earlier this year it was announced that the historic property would be demolished to make way for a 12-storey apartment building. Local preservationists sprung into action and convinced the owner/developer Anabuki Kosan to postpone demolition. Anabuki agreed that they would delay demolition until October, and would consider selling the property for 360 million Yen if a buyer was found by the end of September.

END_OF_DOCUMENT_TOKEN_TO_BE_REPLACED

Demolition of the historic Jonas Residence has been pushed back to October as the current owner is prepared to sell the house and land for 360 million Yen (approximately 3.6 million USD) if a buyer can be found.

Developer Anabuki Kosan purchased the waterfront property earlier this year and plan to tear it down and replace it with a 10-storey apartment building.

END_OF_DOCUMENT_TOKEN_TO_BE_REPLACED

The local assembly of the Kobe City Council have accepted a petition submitted by local residents fighting to save the former Jonas Residence in Kobe from demolition.

The property was recently purchased by a developer who has plans to demolish it and replace it with an apartment building. The developer has already postponed demolition until the end of June, but the committee will put pressure on the council to urge the developer to preserve the building or at least postpone demolition to a later date.