Bliss Beige Jingumae was originally called The Cascades Jingumae and was developed by New City Corporation as luxurious rental units for expatriates. They filed for bankruptcy in 2009 and the lender, Orix, stepped in to take over the property. At one stage the entire building and land was offered for sale at 20 billion Yen (244 million USD). Since a buyer could not be found, Orix began selling off units in the East Residence at the beginning of 2010.

Units in the West Residence were offered for rent only, although some of the units were available for sale but not publicly advertised.

Due to the bankruptcy of the developer, Orix was selling the units at cost.

This building was constructed to the highest standards and won a 2008 Good Design Award for Architecture.

A large number of units are over 100 and 200sqm which is rare to find in a Japanese developed building. Japanese developers generally build 70 ~ 90sqm units and may include 1 or 2 units over 100sqm, as these are easier to sell to the domestic market.

The building is only 9 stories tall, but it has the highest grade of earthquake resistance construction (menshin, or base-isolation) that would not normally be used in small-scale buildings due to its high cost. The base isolation construction means that the building will not shake as much in an earthquake, so walls are less likely to crack and furniture is less likely to fall over. 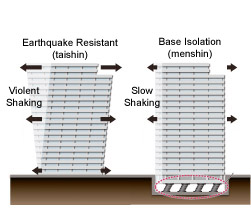 The building only has 88 units, but is on a very large block of land of over 6000 sqm. This means each unit comes with a relatively large portion of land ownership. In Japan, an apartment may depreciate in value over time but its land ownership portion will retain or increase in value.

Smaller number of units mean less residents and more privacy. There are a lot of elevators servicing different wings so the elevator hall on each floor may only have 1 to 3 apartments.

Several Taiwanese celebrities have purchased apartments in this building.

The facilities include 24hr concierge service, fully-equipped gym and changing rooms, party room and a swimming pool. The indoor pool can be booked privately.

Catering and house-cleaning can be arranged through the front desk.

Apartments are fitted out with European appliances, have deep balconies, spacious rooms and many of the large-type units have 2 bathrooms (a rarity in Japan).

When sales initially began, a 1-bedroom (85.62 sqm) apartment was priced at around 105 million Yen. These apartments sold out in record time.

The penthouse was originally designed for the president of New City Corporation. With a total interior size of 720 sqm (7750 sqft) it is said to be the largest apartment to exist in Japan. The price of this 8th and 9th floor penthouse when new was 1.6 billion Yen.

Bliss Beige is a short walk to Yoyogi Park and Omotesando and only a 1 minute walk to the bustling Takeshita Dori shopping street – a famous landmark of Harajuku. Although Bliss Beige is only one block behind this street, it is very quiet.

Togo Shrine is to the south-east of the property so units facing this direction will overlook the greenery of the Shrine. This Shrine is used for wedding ceremonies and there is no cemetery in the grounds.

The following is a list of apartments that were listed for sale in the past, or that have sold. Please understand that these apartments may no longer be available for sale.

*Japan Property Central, K.K. is a fully licensed real estate agency. We are able to assist buyers with the purchase of apartments in this building and similar ones. Our fees to buyers are 3% + 60,000 Yen + consumption tax.