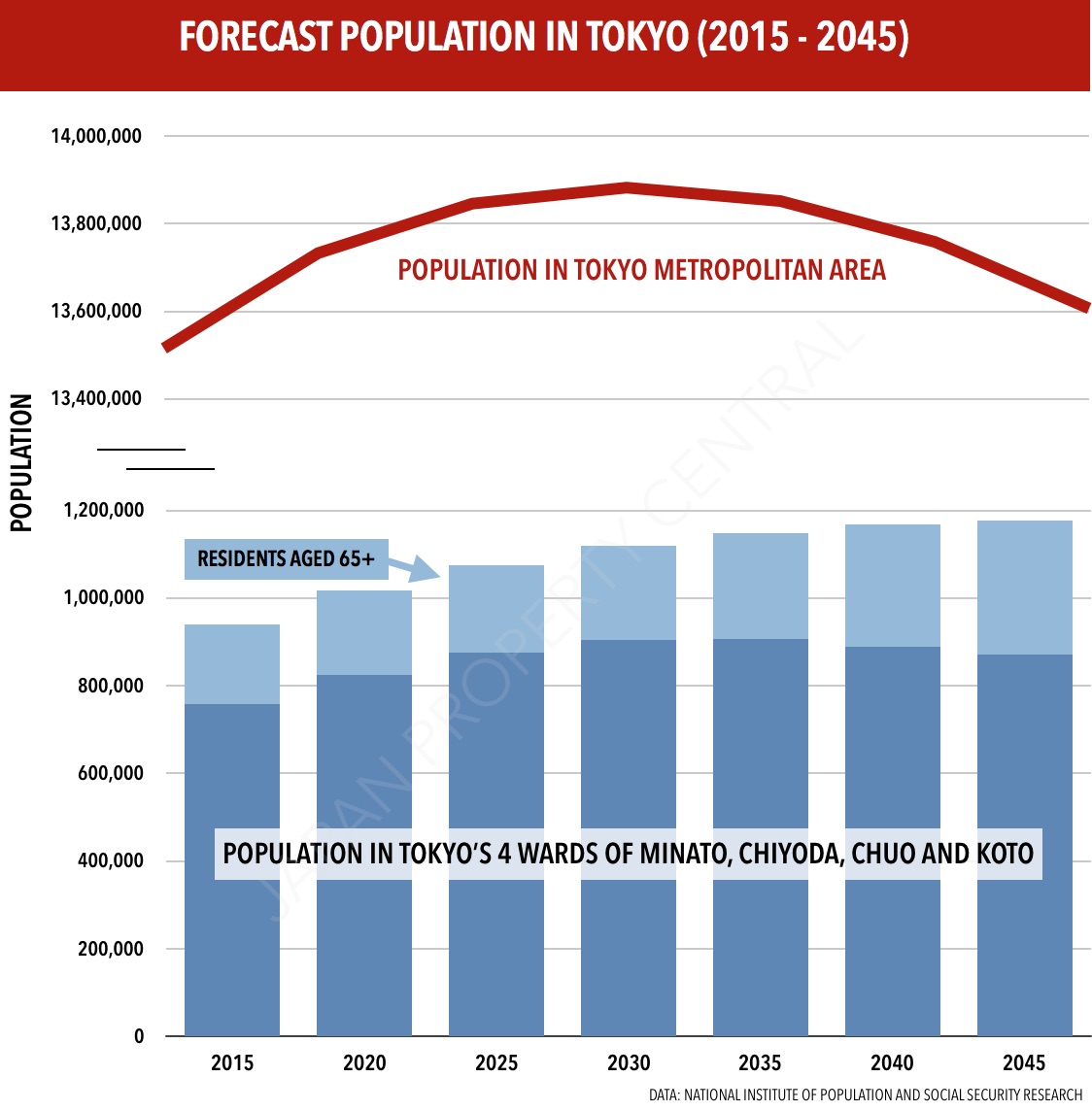 Koto ward has been struggling with a shortage of schools for many years. In 2002 they introduced a 1.25 million Yen levy per apartment, payable by developers, on apartment buildings with over 30 apartments, with the funds going towards the expansion or construction of schools. In 2018, the developer of a 1,200-unit complex donated a school site to the ward in lieu of the 1.5 billion Yen levy.

Nevertheless, Koto is not able to keep up with the apartment construction boom and growing population. The Toyosu district in Koto had a population of 117,674 as of May 2018, with 2,107 new residents moving in over the past 12 months.  In March 2018 a local ordinance was introduced that limits the ratio of family-type apartments (those over 40 sqm) to no more than 80% of the total units in a building, while also requiring multi-generational apartments of over 90 sqm. The rule applies to buildings developed from October 1, 2018 onwards that contain over 151 apartments. This is an attempt to slow the number of new families moving into the ward and reduce the strain on existing schools. Another side to the rule is an attempt to provide housing for a growing senior population.

According to the National Institute of Population and Social Security Research, the number of single-person households aged over 65 in the Tokyo metropolitan area is expected to increase from 640,000 in 2010 to 1,040,000 by 2035.

Koto’s rule will require that 20% of the apartments be sized between 25 ~ 40 sqm (267 ~ 430 sq.ft), which is deemed suitable for single occupants. The multi-generational apartments over 90 sqm are also designed for elderly parents to live with their children and grandchildren. By encouraging the development of a wider range of apartment types, it is hoped that this will allow older residents to downsize while still remaining in the same community and near family members.

Neighboring Chuo ward is planning to introduce similar rules to curb population growth by abolishing floor area ratio allowances. In 1993 they introduced a floor area ratio allowance of up to 20 ~ 40% on certain apartment developments to increase the local resident population. The ward’s population has doubled since the 1990s. In 2017 it exceeded 150,000 residents for the first time in over 55 years, and is over 160,000 as of May 2018. It previously peaked at 170,000 residents in the 1950s before entering into a long period of decline as residents moved out to suburban districts. It reached a bottom of 70,000 in the 1990s. The removal of the allowance will only apply to buildings with less than 100 units, so it may not have an impact on the large-scale developments planned for the man-made islands of Tsukishima, Kachidoki and Harumi in Tokyo Bay. The ward’s population is expected to hit 190,000 by 2045.

Tokyo’s four wards of Minato, Chiyoda, Chuo and Koto are expected to see population numbers increase until 2045, outpacing population growth for the metropolitan area as a whole.

Local governments are treading a fine line. They need to maintain a healthy demographic balance while being careful not to impose strict rules on development that may negatively impact the local property market.

Providing housing for a variety of household types may help to reduce the risk of these buildings seeing the same fate as many of Japan’s ‘new towns’. These new towns, or bed towns, were largely developed during the 1960s and 1970s on the outskirts of urban centers. When built, the first residents were generally young families. However, as the years went on there was little turnover in the apartments, with very few new families moving in and older families staying put. As a result, these new towns are now similar to retirement villages and suffering from their own ageing demographic issues.