Red-brick foundations of the Ryounkaku Tower in Asakusa were unearthed in a construction site in February. News of the discovery quickly spread, with a number of people visiting the site to catch a glimpse of the long-lost tower’s traces.

According to the Taito-ku Board of Education, similar red-brick foundations were found in a construction site nearby in 1980. However, since the remains are not considered cultural property and are not in particularly good condition, there are no heritage protections or limitations to restrict the construction work. A 3-storey retail building is planned for the site. 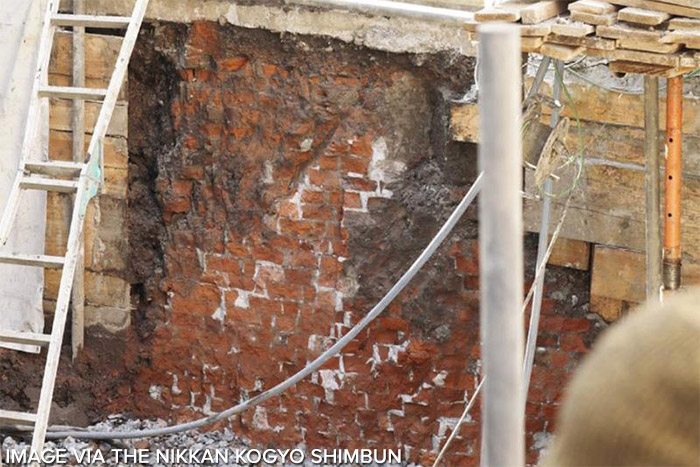 Ryounkaku Tower was built in 1890 as a department store that featured 46 stores selling speciality goods from across the world. The first 10 floors were constructed from brick, while the top 2 floors were wooden. Observation decks were located on the upper floors. With a height of 52 meters, this was once the tallest building in Tokyo and also home to Japan’s first electric elevator. The elevator shut-down six months after completion due to safety concerns, but restarted in 1911.

Shop revenues were lower than anticipated and in 1911 the retail floors were converted into an entertainment hall. Customer numbers recovered temporarily but the building continued to remain unprofitable.

Most of the tower above the 8th floor was destroyed in the 1923 Great Kanto earthquake and was demolished by the army a few weeks later. The site later became the Asakusa Toei movie theatre, and is now a Pachinko parlor.

In mid-2013 a developer planned to construct a replica of the tower as part of a theatre to be built 20 meters south of the original tower’s location. The opening was scheduled for late 2014 but a steep rise in construction costs have led to a long delay.