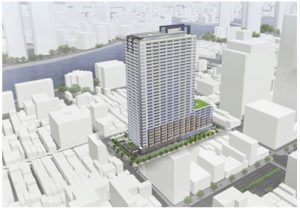 A 32-storey, 122 meter tall residential building is under construction alongside Tsukishima’s Nishinaka Street in Chuo-ku, Tokyo.

The street, which is also known as Monja Street, is famous for being lined with over 70 restaurants serving monjayaki dishes.

The Tsukishima 1 Chome Nishinaka Street District Redevelopment (officially named ‘Mid Tower Grand’) is a 30 billion Yen project being lead by developers Marubeni, Mitsui Fudosan Residential and Taisei Construction. The building will contain around 500 apartments, as well as retail space and a pachinko parlor. Demolition and construction work began in March 2017 and completion is scheduled for late March 2021.

The 7,000 sqm site is 120 meters from Tsukishima Station on the Oedo Subway Line. Capital Gate Place, a 53-storey high rise apartment building, is located on the western side, and the 32-storey, 110 meter tall I MARK Tower is located on the north-west side. Apartments in I MARK Tower have been re-selling for around 900,000 Yen/sqm, while those in Capital Gate Place have been selling at around 1,315,000 Yen/sqm. The difference in price may be due to the age difference between the buildings, as well as the station-connectivity and prestige of the Capital Gate Place project.

This location was previously home to a number of old, wooden terrace houses fronting onto tiny alleyways, which was very typical of Tsukishima’s former streetscape. The density, construction and poor road access creates a serious fire risk for these neighborhoods. Over 80 houses will be demolished to make way for this new project.

Tsukishima 1 Chome through to 4 Chome is a man-made island created in 1892 from soil dredged out of Tokyo Bay. The relative proximity to nearby ironworks for shipbuilding saw an influx of low-income housing for factory workers. Many of these old laneways and cramped house lots remain today. Nishinaka Street was around since the end of the Meiji era, filling up with restaurants and shops serving local residents and those coming and going from the nearby ferryboats that would take passengers between Tsukiji to Tsukishima (the first bridge wasn’t built until 1940). Much of Tsukishima’s old streets managed to survive damage from WWII bombings and are still visible this to this day.

Located across the street from the project site is a small building said to be Japan’s oldest standing police box. Built in 1921 out of wood, it was converted into a concrete structure in 1926. 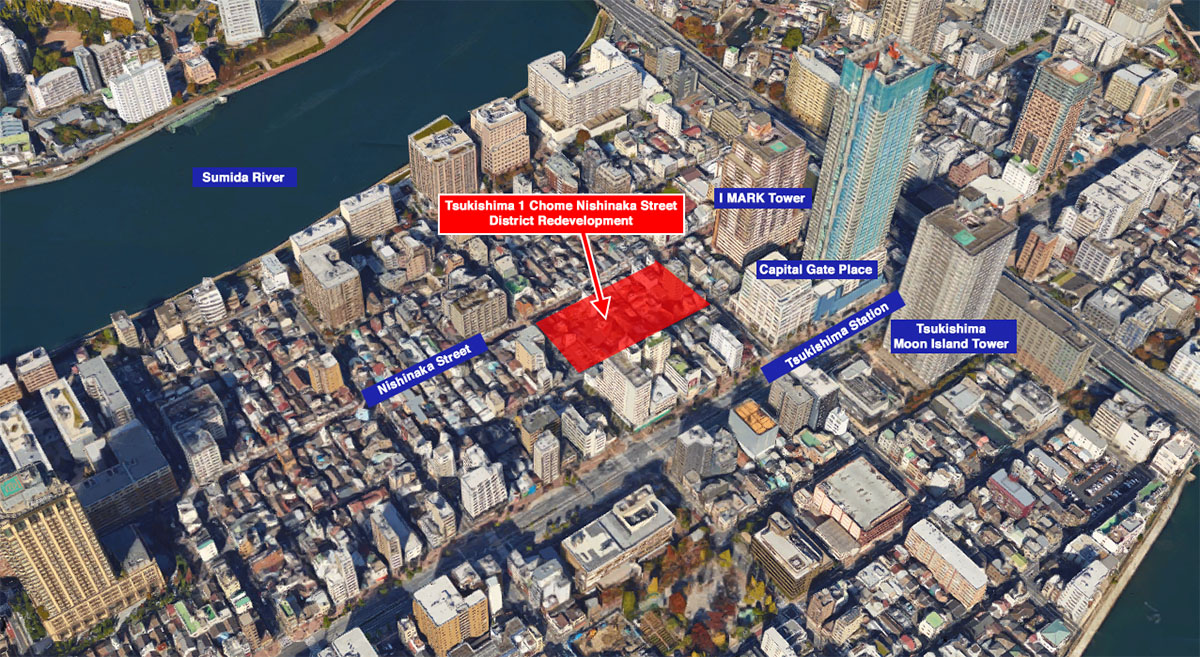