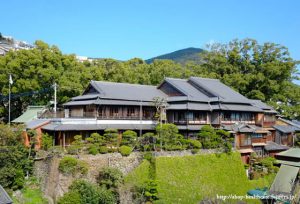 The owner and operator of the 150-year old Fukiro Restaurant in Nagasaki City will be temporarily closing the restaurant later in the year while they search for a buyer of the historic property.

The owner, who is the 6th generation of the founder, made the difficult decision due to a shortage of staff and not having a successor. Annual revenues have also fallen to about 10% of what they were during the bubble years. The large building and traditional Japanese gardens are costly to maintain, which is putting a further strain on operations.

The 3-storey wood-frame building has a total floor area of 740 sqm (7,962 sq ft). It was built between 1868 and 1911, with additions made several times over the past century. It was registered as a Tangible Cultural Property in 2007.

Located in an elevated and prominent position, the long-running restaurant had become a local landmark. Past diners have included members of the Imperial Family, as well as Japan’s first Prime Minister, Prince Hirobumi Ito (1851-1909), who visited the restaurant in 1889 and gave it its current name. It was famous for serving Nagasaki’s Shippoku style of food, which is a fusion of traditional Japanese, Chinese and Portuguese cuisine. Dinners ranged from 12,000 ~ 26,000 Yen.

The owner is searching for corporate buyers both within and outside of the prefecture.