Hakone Hotel Kowaki-en will close its doors in January 2018, marking the end of 60 years of operations. The 224-room hotel was designed by modernist architect Yoshimura Junzo and built in 1959. The hotel’s garden dates back to 1914.

The hotel closure is due to aging buildings and facilities. The owner and operator, Fujita Kanko, operates 6 other hotels in the immediate neighbourhood, and this site is expected to form part of a larger hotel redevelopment project. It could include the adjoining Kowaki-en Horai-en Garden, which is a 16,000 sqm traditional Japanese landscape garden. Fujita Kanko acquired the garden in 2015.

The hot spring hotel has been a popular location for watching the Hakone Ekiden road race. It is located in a prime position alongside the Tokaido Road and across from the Okada Museum of Art.

From 1948, the Kowakudani District, most of which is owned by Fujita Kanko, has been developed into a hot spring resort area. Before that, it was home to several grand holiday villas owned by some of Japan’s wealthiest families. Several of these historic homes are now heritage listed.

Fujita Kanko’s latest venture in Hakone is the Hakone Kowaki-en Tenyu, which is set to become a landmark hotel in this area when it opens in April 2017. All of the 150 guest suites will have their own outdoor ‘rotenburo’ baths, and some rooms will also have foot baths on the balconies. Room rates will start from 28,000 Yen per person, which is about 10,000 Yen higher than the rates in Hotel Kowaki-en.

Last December, Kanaya Resorts announced that they will be opening Kanaya Resort Hakone in late 2017. The resort is located on a 21,000 sqm block of secluded land in Sengokuhara and will have 14 guest suites, a restaurant, bar, lounge and garden terrace. All rooms will have outdoor rotenburo baths. 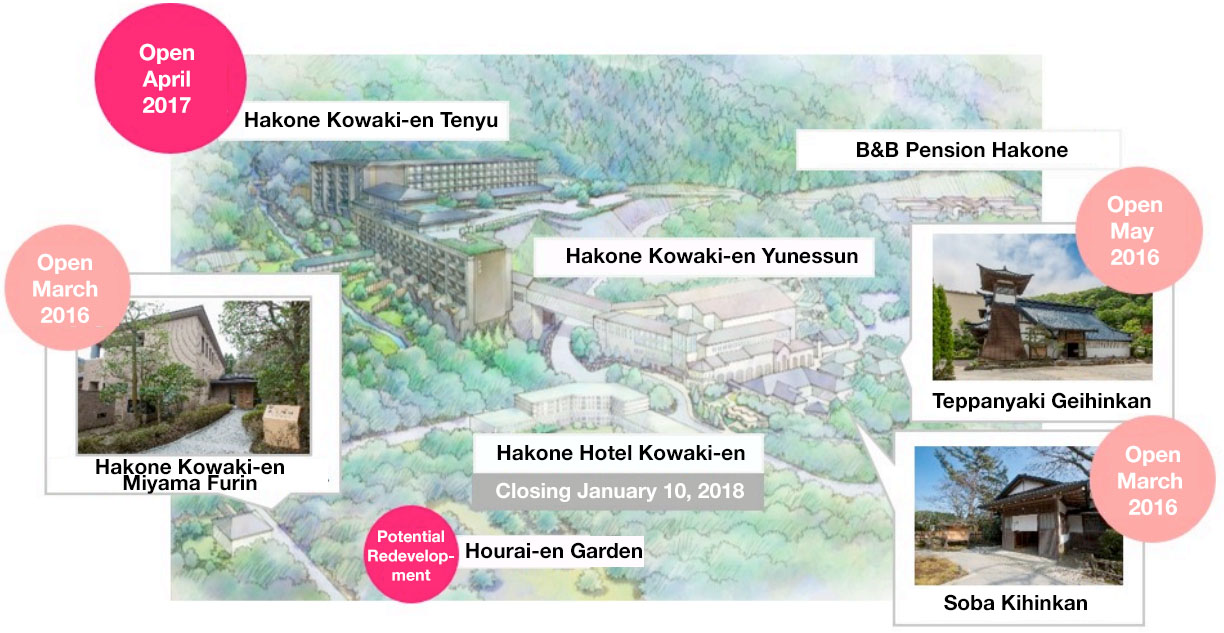