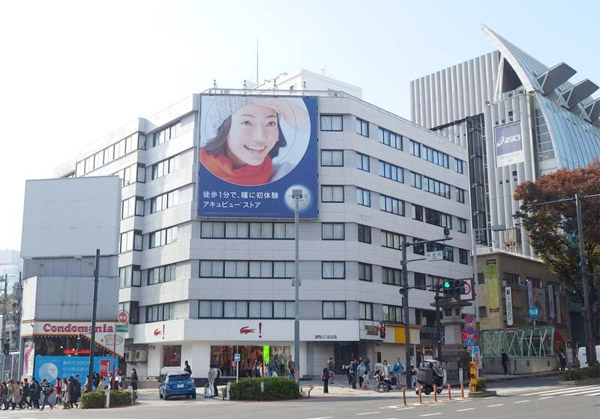 The redevelopment committee was established in August 2015 and includes Tokyu Land (who acquired Coop Olympia Annex in 2013), Colombin Co. (a biscuit and cake company that have their headquarters next-door to Coop Olympic Annex), part of Tokyo Metro’s subway facilities (the Chiyoda and Fukutoshin Lines are both located nearby), and the Tokyo Metropolitan Government (owner of the Jingumae Onden Resident Hall).

The buildings are all relatively old. Coop Olympic Annex was built in 1965, Colombin’s building was built in 1967, and the resident hall was built in 1957. Tokyu Land acquired Coop Olympia Annex from Elliott Management in September 2013 at an estimated price of around 11 ~ 12 billion Yen (approx. 111 ~ 121 million USD at the time). It currently only fronts onto Omotesando Avenue, with a narrow ward road running along the Meiji Avenue side. The asphalt-covered land between the small road and Meiji Avenue forms part of the city’s Meiji Avenue road widening plan, which has been slowly progressing along this street.

Under the Omotesando District Plan, which came into effect in 2002, maximum building heights for buildings fronting onto Omotesando Avenue are 30 meters. Land fronting Meiji Avenue has a height limit of 60 meters. Also, the maximum building volume ratio for the first 30 meters of land fronting Omotesando and Meiji Avenue is capped at 500% due to it being zoned as commercial land, while land beyond this point is zoned as mid/high-rise residential and has a 300% volume limit.

Project details are still under discussion but it is likely to be a retail development. There are no current plans for a residential component. The committee is hoping to receive city planning approval in June 2016. Construction could then start in 2018 with completion by 2020.

Tokyu developed the Tokyu Plaza retail complex on the opposite side of the intersection in 2012.