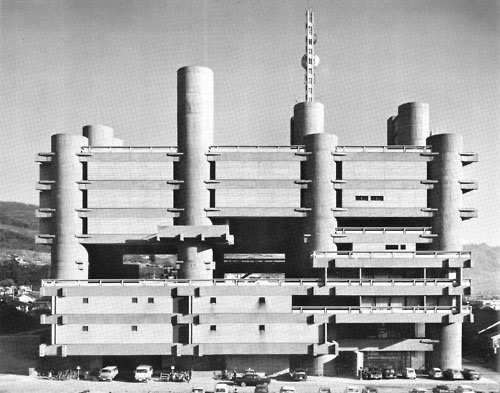 The 49-year old Yamanashi Cultural Hall building in Kofu City is undergoing earthquake retrofitting which is expected to extend the building’s lifespan for another 50 years.

The 8-storey building was designed by modernist architect Kenzo Tange and competed in 1966. It is said to be one of Tange’s exemplary works and was selected by DOCOMOMO Japan as one of the top 100 modernist buildings in the country. The structure was designed to allow for future extensions, and the original floor area of 18,000 sqm was later expanded to 22,000 sqm.

Sumitomo Mitsui Construction will be carrying out the base-isolation retrofitting, with planning by Tange Associates. The work is expected to be completed by the end of 2016.

Tange also designed the Kagawa Prefectural Government Office East Building in 1958. Kagawa Prefecture is making efforts to preserve the building rather than rebuild. Earthquake retrofitting has been estimated for cost over $30 million USD, but would also extend the concrete building’s lifespan (read more about the Kagawa building here).