On March 13, the Ministry of Land, Infrastructure, Transport and Tourism (MLIT) announced that a rubber product manufactured by Toyo Tire & Rubber and used in the construction of base-isolated buildings does not meet national standards. Although the product was approved by the MLIT, the data was falsified by the product maker. The MLIT cancelled the certification on March 13.

Toyo president Takuji Yamanoto apologised at a press conference held on the same day. An apology was also posted on the company’s website.

The rubber has been used in 55 buildings across Japan, including apartment buildings, government buildings and hospitals. Five buildings are in Tokyo and six are in Kanagawa Prefecture. The MLIT has identified several of the affected buildings:

Toyo has a 3 ~ 4% share of the market for base-isolation rubber bearings.

The base-isolation (menshin-kozo) system of earthquake resistance is considered to provide the best protection against damage to buildings in an earthquake. It uses bearings or pads to isolate the building from the ground and absorb the vibrations.

Five of Toyo’s rubber products sold between 2004 and 2015 were found to be more than 10% below MLIT guidelines, and in some cases up to 50% below standards. Three of those products received MLIT certification based on falsified data. In early 2014, Toyo’s quality control officer was replaced with a new employee who noticed the inconsistency in the data. Toyo informed the MLIT of the error in December 2014.

MLIT is requesting that Toyo inform affected building owners and either replace or repair the rubber bearings. There is a chance that some residents and occupants may be required to temporary vacate the buildings. 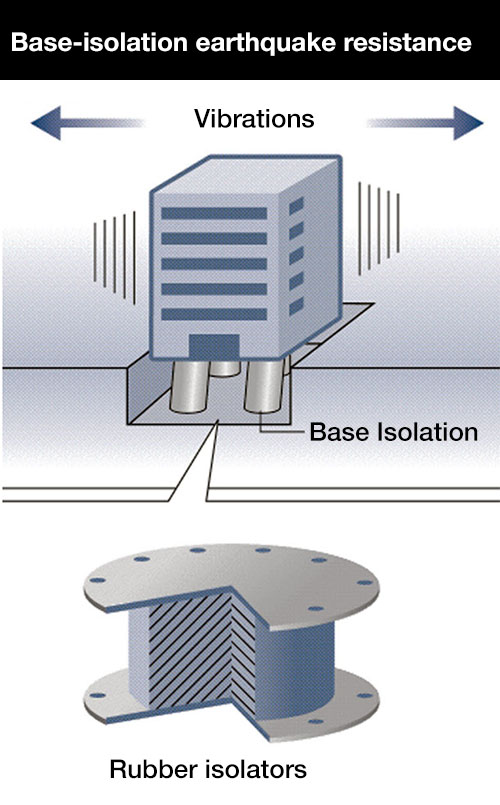