On March 18, the Ministry of Land, Infrastructure, Transport and Tourism (MLIT) announced the 2015 Chika-koji land prices for Japan. The nationwide average for commercial land prices saw no change from last year, ending a seven year streak of declining prices and indicating a possible recovery.

Residential land prices dropped by 0.4%. This was the 7th year of consecutive decline, although the rate of decline has been shrinking.

In Tokyo, Osaka and Nagoya, 70% of the surveyed commercial land sites saw an increase in prices, while 70% of the locations in regional areas saw a decline.

The Izumimoegidai neighbourhood in Iwaki City, Fukushima Prefecture, saw the highest increase in land prices in Japan with an increase of 17.1% from last year. The top 10 residential land price increases were all in Iwaki City, which has been seeing an influx in demand from people who were displaced after the 2011 Tohoku disaster. 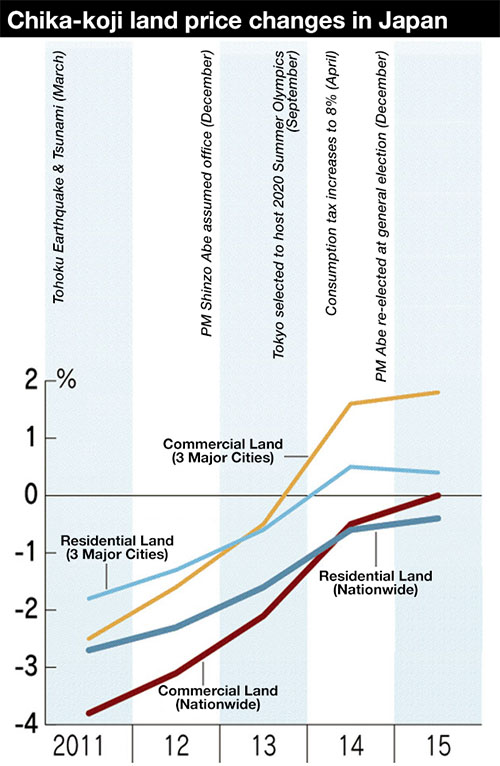 An improving local economy and an increase in the number of foreign tourists is causing an increase in demand for office and retail space in central Tokyo. Commercial land prices in the capital increased by an average of 2.9%. Office vacancy rates reached a six year low in February after dropping by 1.70 points from the previous year to 5.31%.

Five of the top 10 commercial land price increases nationwide were located in Tokyo’s Ginza district, which saw prices rise by as much as 12 ~ 14%.

In Tokyo’s 23 special wards, all wards saw an increase in residential land prices. Historically low interest rates and an expectation of improved infrastructure in the lead-up to the 2020 Olympic games has supported recent price growth. This year, several prime locations in Minato-ku were more prominent in residential land price increases, while two locations in Chuo-ku’s bayside areas made the top 10.

While sales of apartments in central Tokyo remains feverish, the story is quite different for suburban areas where consumers have yet to see any benefit from Abenomics.

Developers, who are facing rising construction costs and rising land prices, cannot pass these extra costs along to buyers of apartments in suburban areas. To keep costs down, they need to acquire land at a lower price. Some major real estate companies have been reporting a breakdown in negotiations with landowners for development sites in Chiba and Saitama. Furthermore, developers are not interested in land that is more than a 10 minute walk from the nearest station in the case of apartments, or more than 15 minutes walk in the case of detached housing. In outer areas, anything further than 10 ~ 15 minutes walk from the station can be difficult to rent or sell. As a result, some areas may see an increase in land prices in the vicinity of a station, while prices may continue to drop in locations just a few kilometres away. 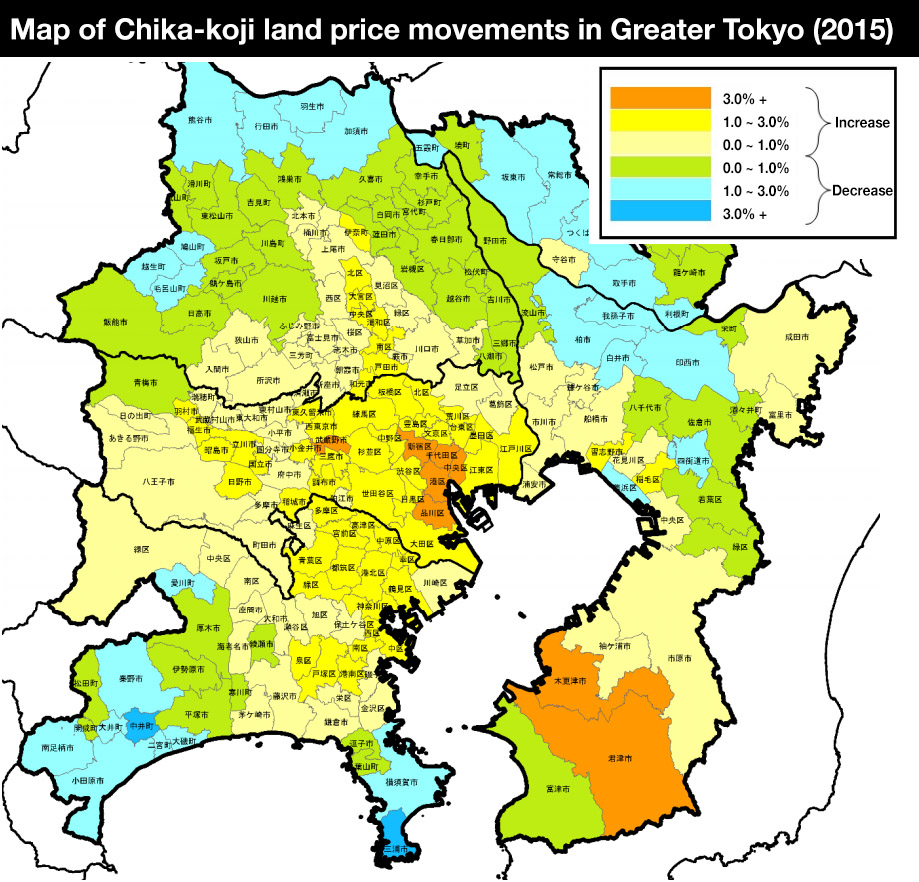 The most expensive land in Japan: