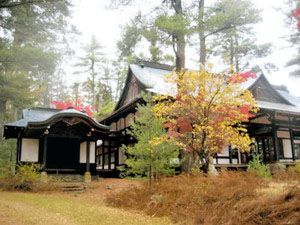 The current owner of a historic traditional Japanese house in upstate New York wants to relocate the home to Japan and is seeking a new owner.

The ’Pine and Maple Palace’ was initially exhibited at the St. Louis World Fair in 1904. It was modelled in a style of architecture dating from the Momoyama period (late 1500s), but with some western features. After the fair, Emperor Meiji donated the villa to Dr. Jokichi Takamine, a successful chemist who had emigrated to the US. Takamine relocated the villa to his summer home in upstate New York. In 1909, Prince Kuni Kuniyoshi and Princess Kuni stayed in the villa during a visit to the US. The house was sold upon Takamine’s death in 1922.

The current owner is Japanese and hopes to relocate the house to either Takamine’s hometown Takaoka City, Toyama Prefecture, or Kanazawa City in Ishikawa Prefecture, where Takamine spent his childhood.

The two-storey home has a total floor area of 400 sqm. The parlour, dining room and bedrooms are decorated in gold leaf. In 2007 the property was purchased by the chairman of a Nagoya-based textile company who was living in New York. The owner repaired the foundations, flooring and roof.