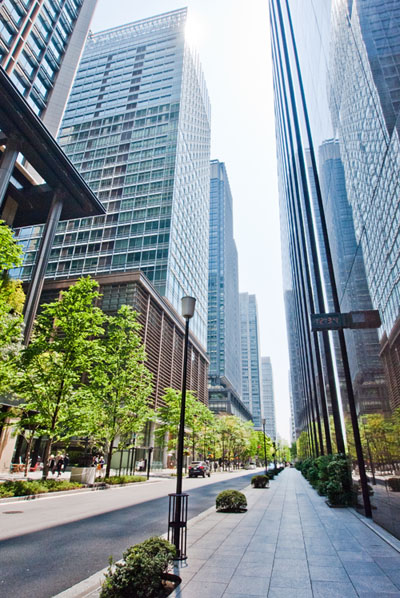 Central Tokyo’s office market is experiencing a rebound as vacancy rates drop to their lowest level since 2009. According to Miki Shoji, the vacancy rate in Tokyo’s central five wards (Chiyoda, Chuo, Minato, Shinjuku and Shibuya) was 6.70% in March – the first time it had fallen below 7% in 4 years and 10 months. In April, it dropped a further 0.06 points to 6.64%.

As market conditions and business outlooks improve, demand is growing from companies looking to locate their operations in earthquake-resistant buildings in the centre of the city.

Ebisu’s commercial centre – Ebisu Garden Place – suffered a brief setback when their main tenant, Morgan Stanley, moved to Otemachi Financial City, but 70% of the recently vacated space was quickly taken up by both new and existing tenants. The remainder is expected to be fully leased by the end of the year. Smartphone game producer, Colopl Inc, moved their headquarters into Ebisu Garden Place in 2012 but recently leased additional space in the building. Although the complex is 20 years old, 6 billion Yen is being spent on upgrades including installing 72-hour emergency power generators and other equipment to provide relief in a disaster.

Elsewhere in Tokyo, LG Electronics Japan moved their headquarters from Akasaka in Minato-ku to Kyobashi in Chuo-ku. Their new office space is 50% larger than before.

Mitsubishi UFJ Morgan Stanley Securities relocated from Marunouchi to Bunkyo-ku in order to reduce their rental costs, but are now planning to shift to a new office tower in Otemachi when it is completed in 2016. The new building will have the latest and greatest counter-measures for disasters, including back-up generators and water filtration systems.

Universities, too, are expanding and shifting campuses. Jissen Women’s University are relocating their literature, human and social studies and junior college faculties from Hino City to Shibuya. Hosei University has given up on their plans to shift their campus to the outer suburbs, and is now actively buying up land and buildings around their Ichigaya Campus in Chiyoda-ku. The removal of restrictions that once limited the expansion of universities in central Tokyo to prevent overcrowding has been a driving force behind the recent activity.

Real estate experts are anticipating the office market to improve into the near future. Mizuho Securities senior analyst Mikio Namiki is expecting the office vacancy rate in central Tokyo to fall to the 5% range within the next 12 to 18 months. This will level the playing field between tenant and landlord and could create conditions where it is easier for landlords to achieve higher rents.

According to Miki Shoji, the average office rent in central Tokyo was 16,455 Yen per Tsubo (4,986 Yen/sqm) in April. This was the fourth month in a row where rents have increased from the previous month.