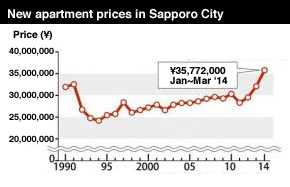 The average price of a brand new apartment in Sapporo, Hokkaido, reached 32,082,000 Yen in 2013 – a level not seen since Japan’s bubble economy in the late 1980s. The rising prices have been brought on by the increasing cost of construction, an increase in the consumption tax rate which caused some last minute buying and an expansion in the tax reductions on home loans.

Industry insiders are expecting prices to continue to grow, but some are worried that the market could cool down if prices become unaffordable.

A salesperson for a developer in Sapporo said prices increased by about 10% over the two years to September 2013, but have since shot up another 15 ~ 20% since then. The developer started increasing prices in 2012. They now sell their apartments for around 4 ~ 5 million Yen more than they did two years ago. They have increased prices due to the sharp rise in the cost of labour and building materials.

The deadline to lock in the 5% consumption tax charged on the building portion of a new apartment purchase was September 30, 2013. Any contracts signed after this date and where the apartment was due for handover after April 1, 2014, would incur the 8% consumption tax. This led to a surge in new apartment sales across the country.

The detached housing market is showing a similar trend. One of Hokkaido’s major home builders – Tsuchiya Home – increased their average price per home by about 1%, which translates to an additional 300,000 ~ 400,000 Yen per home. They are not expecting prices to drop in the foreseeable future.