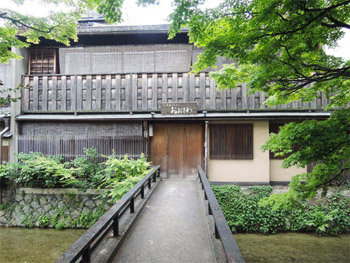 Kyoto City is looking for a tenant for a traditional-style residence/restaurant in the Gion-shinbashi neighbourhood. The 2-storey wooden house was during the Meiji period and is estimated to be around 120 years old.

Until recently it was used as a tempura restaurant. The owner of the property and former operator of the restaurant left the property to the city in June 2013 with the hope that the city could continue to conserve and protect the historical building.

The city will be accepting offers from commercial enterprises looking to lease the space. They are looking for a tenant who understands the charm and character of Gion and who has a practical and economical plan for the use of the property. The lucky tenant will be required to sign a 10-year fixed-term lease with a minimum rent of 500,000 Yen (4,900 USD) per month. This is considered to be a relatively cheap rent as ryokan/restaurant-type properties around Gion can cost upwards of 1 million Yen/month.

The city will conduct earthquake-retrofitting and roof repair work for a total cost of 21 million Yen.

The city welcomes applications from across Japan and also encourages overseas applicants. Offers must be submitted by the end of September 2014 with the new tenant announced in October.

The 1.4 hectare Gion-shinbashi neighbourhood is registered as an Important Preservation District for Groups of Traditional Buildings.

The house is located alongside the Shirakawa canal (White River) which runs alongside the flagstone Minami-Shirakawa Dori Street. This canal is lined with restaurants and ryokans and is a popular tourist destination. It is even more popular in the springtime when the Cherry Blossom trees lining the street are in full bloom.

Google has a virtual walkthrough of the restaurant which can be viewed here.