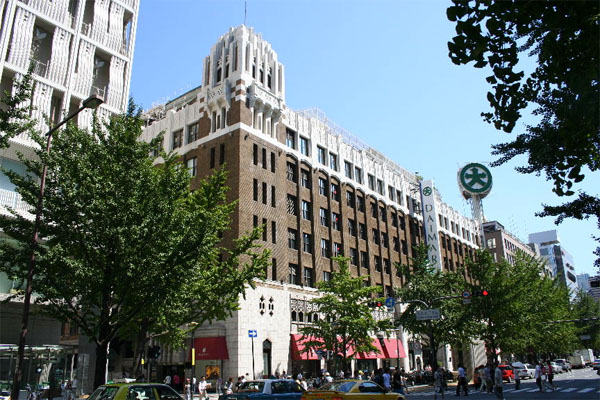 The store was designed by US-born architect William Merrell Vories and completed in 1933. Design-wise, the building is considered to be the best department store in Japan. It is a well-known example of ‘Taisho Modern’ architecture which is a mix of art deco and neo-gothic styles. In 2003, it made the DOCOMOMO Japan list of the top 100 modern buildings in the country.

The top floor was destroyed in an air-raid in 1945 but repairs and extensions to the building have been in keeping with the original design.

Growing competition from nearby department stores and the ageing of the building has led J. Front Retailing to embark on a redevelopment plans.

At the peak of Japan’s bubble in 1989, the Shinbashi store recorded 176 billion Yen in total revenue, making it the 3rd highest grossing department store in the Kinki region. By 2012, the store had dropped to 5th place with annual sales of 82.9 billion Yen.

A selection of images showing the architectural details of the store can be found on the Daimaru website here.