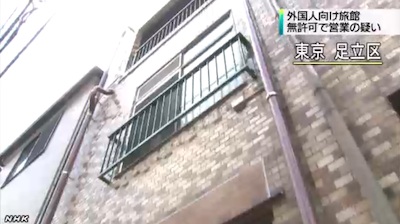 A British expat was arrested on May 16 for operating a short-stay hotel without a proper license. The 28-year old wanted to offer cheap accommodation for foreign tourists and rented out rooms and bunk-beds in a share-house in Adachi-ku.

According to the police, the man is suspected of renting rooms out of a private residence for 2500 ~ 5000 Yen per night to mostly foreign guests. Police estimated that the illegal lodgings made 1.3 million Yen since November 2013. The Tokyo Government issued ten ‘administrative guidance’ requests for compliance since December 2013, but the accused insisted that the property was being used as a share house rather than a hotel.

Under the hotel business law, it is illegal to operate such short-stay lodging facilities without approval from the prefectural governor. Certain requirements must be met in order to rent out a property for less than 30 days, including meeting a minimum floor area, having a front desk, laundry facilities and linen change services. The building must also meet certain construction and safety standards.

The government is currently looking at revising this minimum down to 4 ~ 7 days for properties located within designated strategic zones, but plans are still under discussion.

People listing rooms or properties on AirBnb for stays of less than 30 days risk being arrested if they do not obtain proper approval.

In 2013, a 30-year old South Korean was arrested for operating a 37-room unlicensed hotel out of several apartment buildings in Osaka.