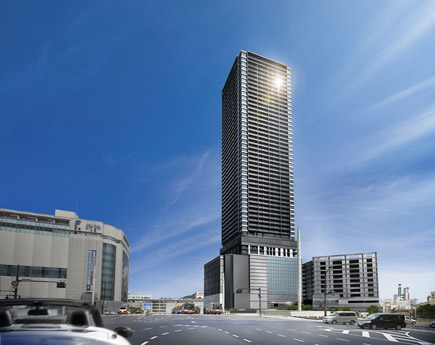 Sumitomo Realty & Development announced the launch of a condominium in Hiroshima that will be the region’s tallest apartment building when complete. City Tower Hiroshima will be 192 meters tall and contain 514 two, three and four-bedroom apartments.

Residential apartments will be on floors 13 to 52, with a lobby on level 12. The majority will be 3-bedroom apartments with an internal area of 75 sqm (807 sqft).

Facilities include guest suites, a party lounge and gym. The building will have direct access to a basement shopping arcade which connects to Hiroshima Station.

Sumitomo’s ‘City Tower’ series of condominiums are known for their floor-to-ceiling panorama glass windows. There are over 100 City Tower-branded buildings across Japan containing over 20,000 apartments. This particular building in Hiroshima will be the first City Tower in the Chugoku region.

Sales are scheduled to begin in March 2014. Completion is expected by June 2016, with apartments ready for delivery by the following December.