Meiji Jisho, a company affiliated with Cerberus Capital Management, has sold a 1,916 sqm block of land in Minamiaoyama 3 Chome to Shimizu Corporation. The deal is estimated to be around 13 billion Yen (6,785,000 Yen/sqm).

The land is currently a parking lot and fronts onto Aoyama Dori Avenue.

An adjoining 2,500 sqm site was sold by the Urban Renaissance Agency (UR) in March 2013 for 5.6 billion Yen (2,240,000 Yen/sqm). It was reported that the buyer was City Index Seven – related to the Murakami Fund. UR’s landholding is more scattered with private roads and a smaller street frontage. 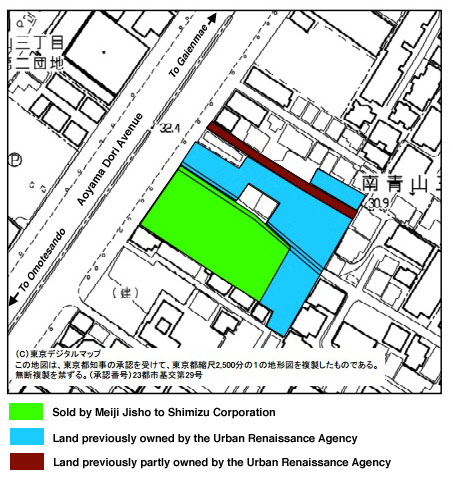 In 2006, an article in the Mainichi Shimbun alleged that Meiji Jisho was somehow involved with organised crime in Japan and said that the Cerberus unit had paid brokerage commission to yakuza when acquiring the land.  Cerberus filed a 11.5 billion Yen libel suit against the newspaper. The newspaper reporter was later sent bullets and threatening letters. A settlement was reached towards the end of that year.

The entire site was once planned to be redeveloped in the 1980s but has become a complicated mess involving a number of owners, including some unsavoury characters, over the past two decades.