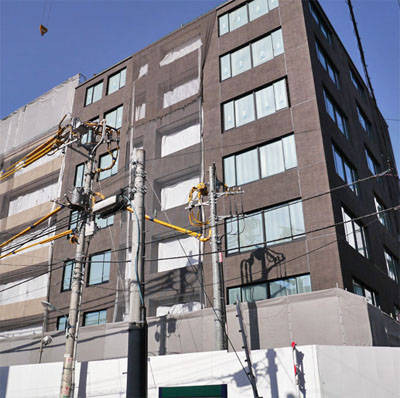 Mitsubishi Jisho Residence is currently in the process of cancelling sale contracts on apartments in The Parkhouse Grand Minamiaoyama Takagicho after a construction fault was discovered.

Just before Christmas in 2013, an anonymous post on an online discussion board mentioned that there had been some core drilling into the concrete. Drilling holes in concrete to take core samples usually indicates a potentially serious problem.  Adding to suspicions, Mitsubishi removed the sales page for the project and removed any mention of the new building from their website a few days later. The building still had 3 apartments left for sale.

The message boards lit up with comments from concerned buyers who were desperate for an official response from Mitsubishi.

On January 25 and 26, Mitsubishi held two explanation sessions for buyers. At these sessions, buyers were informed that the company contracted by Kajima Corporation to install plumbing (Kandenko) had forgotten to install sleeves for plumbing in about 600 locations. As a makeshift solution, holes were drilled in the concrete afterwards and in some cases the rebar was accidentally cut. Fuji News Network reported the incident on January 25, but the article was removed a few hours later.

Mitsubishi said that it could take 12 months before they can fully understand the situation and cannot rule out the possibility that the building may be demolished and rebuilt. They acknowledged that the problem was only brought to their attention because of the anonymous online whistleblower and will take extra measures to keep a close eye on the construction of their other projects.

The luxury apartment building was to be the first of Mitsubishi’s new ‘The Parkhouse Grand’ series. It is located in the high-end Minamiaoyama residential district near Roppongi, Shibuya, Hiroo and Omotesando. Apartments were priced from 85 ~ 350 million Yen (1,400,000 Yen/sqm), with most priced around 140 million Yen each. 83 of the 86 apartments had already been sold by the end of 2013. The 7-storey condominium was due to be handed over to apartment buyers on March 20, 2014.

Buyers have been offered a full refund of their deposit as well as compensation equivalent to 20% of the purchase price. They may also receive additional compensation to provide for out-of-pocket expenses associated with finding temporary accommodation. It is expected that the cost of cancelling the contracts could cost Mitsubishi 2.3 billion Yen (22.7 million USD).

The developer has had some unfortunate events with some of their projects recently. A fire broke out in The Sanno Tower while under construction in December 2013, and two workers were killed in a workplace accident on The Parkhouse Nishiazabu Residence construction site in January 2014.

Despite strict building regulations in Japan, there are still occasional stories of faulty buildings. Most cases are unintentional, with the exception of the Aheha scandal.