In 2014, the total office space expected to hit the market could amount to just half of the level seen in 2012. Meanwhile, vacancy rates are expected to continue their decline this year as companies shift to new offices and expand operations.

According to Miki Shoji, approximately 844,700 sqm of new office space is expected to be supplied in Tokyo’s central five business districts (Chiyoda, Chuo, Minato, Shinjuku and Shibuya) in 2014. This is a 4% increase from 2013, but is only half of the level seen in the last peak in 2012. 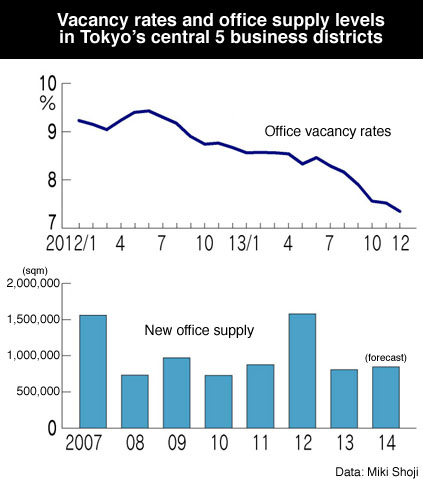 A number of large-scale commercial developments were completed in 2012, adding to the supply of new office space. From 2013, however, development returned to levels seen in 2008 ~ 2011. In 2014, 30 office buildings are expected to be completed.

Demand remains strong from companies shifting to newer and more disaster-proof buildings. Jones Lang Lasalle reported that their number of inquiries about office relocations in 2013 exceeded those of the previous year.

Some of the recent and upcoming moves include:

It’s not all good news for everyone.

While vacancy rates are declining, office rents have yet to show signs of increasing. The average office rent in central Tokyo in December was 16,207 Yen per Tsubo (4911 Yen/sqm), down 12 Yen from the previous month. The rent in brand new buildings, however, was 27,166 Yen/Tsubo (8232 Yen/sqm), up 0.4% from the previous month and at a level higher than was last seen in November 2009.

Landlords of older buildings are being forced to lower their rent in order to attract or even retain their existing tenants.