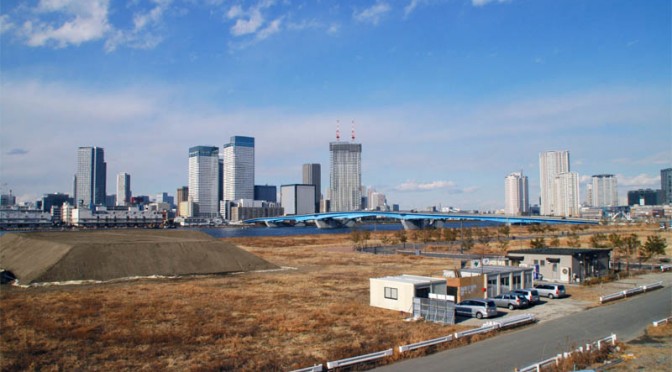 The bayside area in Chuo-ku, Tokyo, including Kachidoki and Harumi, is seeing a surge in development and high demand from buyers following the Olympic announcement several months ago. But there are concerns that the current infrastructure may not cope with the rising population, which is expected to grow by 30% in coming years.

Large supply of apartments in the pipeline

Developers are now racing ahead to build new condominiums in bayside sites that had previously laid dormant for several decades.

The planned increase in consumption tax rates has not slowed demand. We have already received over 4,000 inquiries from potential buyers in their 30s and 40s. – Sales representative from Deux Tours Canal & Spa – a 1,450 apartment complex under construction in Harumi.

Mitsubishi Jisho Residence and Kajima Corporation began sales of apartments in The Parkhouse Harumi Towers in April 2012, but the popularity of the building surged following the Olympic announcement.

After the Olympics, the Athlete’s Village, with over 17,000 beds, will be converted into condominiums and offered for sale.

Currently, 7,000 people live in the Harumi area. If the average household size is 2.5 persons, the supply of new apartments could accommodate up to 30,000 more residents.

Off to a slow start

Despite being just 2 kilometres from central Tokyo, development in Harumi had stalled for years. The main reason was the lack of transport infrastructure. In 1987, the Tokyo Metropolitan Government came up with the concept of creating an urban subcenter in the Tokyo bayside area, and in 1990 created the Toyosu-Harumi Development Plan.

However, the collapse of the bubble economy put these plans on hold. The Toyosu Station area, which is on the Yurakucho Subway Line, saw an apartment boom in the early 2000s and the Toyosu population increased from 7,000 to over 28,000 residents. Meanwhile, the only development in Harumi at that time was Harumi Triton Square (2001). In 2008, The Tokyo Towers was completed in Kachidoki on a site that was previously planned to be redeveloped in the 1980s.

The Athlete’s Village is to be developed by private companies, but major developers are worried that the lack of transport to the site will make the apartments difficult to sell following the Olympics.

Kachidoki Station is already being expanded to cater to the increased number of passengers, but it may not be able to handle a future population explosion.

To counter-act this problem, some have suggested extending the Hibiya Subway Line to Harumi. However, any research into this scenario could take over 10 years.

As a stop-gap measure, the currently under-construction No. 2 Ring Road could be used for a Bus Rapid Transit (BRT) system linking Harumi and Ginza by 2016.

The growing population is also putting a strain on local schools. Kachidoki has two elementary schools – one of which is doubling the size of the school facilities to cater to the growing student population. Harumi currently has just one elementary school at the northern end of the island.

Nevertheless, developers are pushing ahead with new apartments, hoping that infrastructure and other facilities will come along later.

The Toyosu-Harumi Development Plan still remains relatively unchanged from its original incarnation, but the establishment of the Harumi District Future Vision Investigative Commission next year will hopefully address some of the new issues facing urban development on these bayside islands in the lead up to the 2020 Olympics.