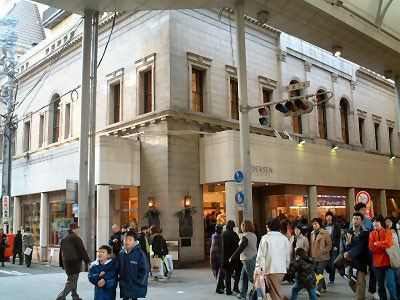 The 88-year old Andersen bakery in Hiroshima is going to be demolished and rebuilt by Andersen Group as repairs and upgrades to the existing building prove too costly.

The renaissance style building was designed by architect Uheji Nagano and completed in 1925. It was originally the Hiroshima branch of the Teikoku Bank (which later merged to become part of the Sumitomo Mitsui Banking Corporation). Mr. Nagano designed a number of buildings for the Bank of Japan, including their head office which still stands in Nihonbashi, Tokyo.

This is the last building still standing in Hiroshima’s Hondori Shopping Street that survived the atomic bombing of the city in 1945. It was just 360 meters from the center of the blast and was severely damaged, but later restored. The former Yamaguchi Bank, also on Hondori Avenue, survived the blast but was demolished in 2002.

In 1967 the building was purchased by Shunsuke Takaki. Mr. Takaki opened his first bakery in Hiroshima in 1948 and expanded into Danish pastries after a visit to Europe in the 1950s. This building became the flagship store for the Andersen bakery and had the very first self-serve bakery in Japan.

Earthquake-retrofitting work was carried out in 2002 at a cost of 150 million Yen. The owners had considered additional retrofitting and upgrades to make it more wheelchair friendly but the costs were prohibitively high. They hope to have the new building open by the company’s 70th anniversary in 2018.