Don’t let the Olympics overshadow your thought process when buying.

Short-sighted buyers who buy under the hype of the Olympics could possibly find themselves in a difficult position after the games have finished.

Since the Olympics announcement last week, the real estate industry has been in a state of excitement as buyers scramble to buy apartments near the action. But the Olympics are still 7 years away and the event only lasts a few weeks. Can this excitement be sustained and what will happen to property prices after the games are over?

Much of the interest is focused on areas close to sporting events and facilities which will be centred on Tokyo’s bayside area such as the islands of Harumi and Ariake. Of the 11 sporting arenas to be constructed, 9 will be in the “Tokyo Bay Zone” area. The media attention from the games should boost the popularity of these areas.

Previous concerns over the earthquake risk to reclaimed land have been outweighed by the Olympic decision as well as the added anticipation of improving economic conditions. This has meant that more and more people are predicting an impending property bubble for these areas.

One of the main drivers into predicted price increases is the rising cost of construction materials and labor. The reconstruction efforts in Tohoku have drained the labor pool and caused a hike in demand for building materials. Further construction needed for the new Olympic facilities is only going to make building costs increase even further. Developers, naturally, pass these increased costs onto the buyers, causing the price of new apartments to rise. 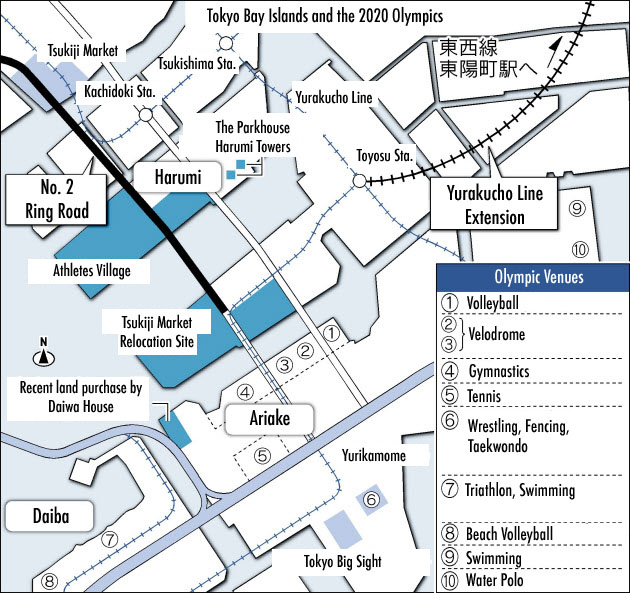 The man-made islands of Harumi and Kachidoki in Chuo-ku are likely to see a boost in values due to the Olympics. These areas were seeing a rapid construction boom prior to the Olympics announcement with a number of large-scale condominiums under construction and planned in the next few years. The area is expected to see its population swell before 2020.

The Athletes Village to be built on Harumi Island will house up to 17,000 residents in 24 buildings during the games. Construction costs are estimated at 105.7 billion Yen. These apartments are expected to be between 60 ~ 135 sqm (646 ~ 1452 sqft) in size. They will only be used from July to September 2020, after which they will be refurbished and either put up for sale or rent, which will further add to the local population (and apartment supply).

The showroom at Mitsubishi Jisho’s ‘The Parkhouse Harumi Towers’ saw twice as many visitors on the day the Olympics were announced. They already had over 100 bookings for the following weekend. The high-rise condominium towers are located on the same island as the Athletes Village.

These areas are approximately 2km from Ginza. The Oedo subway line runs through Kachidoki Station and offers direct access to Roppongi and Shinjuku. It also stops at the National Stadium.

The current population of the Ariake north district is 7,000, but is estimated to one day reach 38,000 residents.

Although a large amount of unused land lies in the northern end of Ariake, development was heating up before the official announcement from the IOC. On August 30, Daiwa House acquired a 3.6 hectare site in Ariake from UR for 42.1 billion Yen (approximately 1.17 million Yen/sqm). They outbid a second developer who had offered 23 billion Yen.

Although Daiwa House have not made an official announcement on their planned use for the land, a high-rise building would offer views over the sporting events.

20 hectares of City-owned land will be used for 4 sporting venues, including volleyball. While the Athletes Village will be retained, several of the Olympic venues in Ariake will only be temporary structures and removed or scaled back after the games have ended. The gymnastics and velodrome in will be demolished and the land sold after the Olympics.

Ariake is only serviced by the Rinkai and Yurikamome lines. These transport lines are considered somewhat inconvenient for daily commutes.

Harumi and Kachidoki stand a better chance of retaining their values as they are closer to the Ginza area, while Toyosu and Ariake in Koto-ku may not see the same benefits.

Mizuho Chief Real Estate Analyst Takashi Ishizawa says apartment prices in the bayside areas could increase by as much as 30% over the next 5 years.

But what about the 10 and 20 year outlook? It is possible that real estate prices could fall over the long term as current prices are relatively high, while transport is not particularly convenient.

At the time of the 1964 Tokyo Olympics were on, the population was growing and Japan was going through a period of economic growth called the ‘Golden Sixties’. The Olympic facilities were focused around Shibuya and led to some big improvements and redevelopment around Yoyogi, Omotesando and Harajuku. This time, however, Japan’s population is in decline.

While the Olympics will definitely have an impact on the man-made islands, this should not be your only consideration when purchasing. As you would when purchasing in other locations, check if the property is convenient to transport, has (or will soon have) nice surroundings and facilities such as shopping and schools, and is in an area where demand should sustain values into the future.