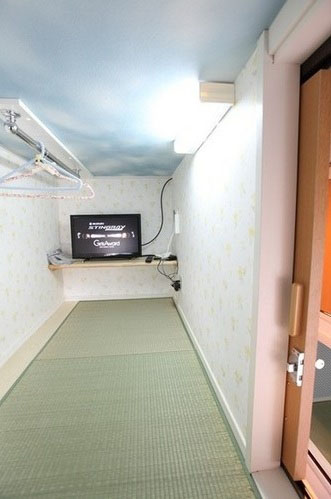 An investigation by a non-government organisation has found that illegal share houses may be operating in as many as 100 buildings in Tokyo. In many cases, commercial offices and apartments have been split into tiny sleeping spaces as small as 2.4 ~ 5.2 sqm (26 ~ 56 sqft). Many of the sleeping spaces have ceiling heights of just 1.2 meters and do not have windows or proper ventilation.

There are concerns over the safety of tenants in these share houses as they may violate the Building Standards Act and fire safety regulations. The Act requires ceiling heights to be a minimum of 2.1 meters and rooms are required to have a minimum floor area of 7 sqm (75 sqft).

Of the illegal buildings discovered, 38 were operating in apartment buildings, 37 in detached homes and 21 in commercial office buildings. It is estimated that they house up to 2,000 tenants.

One apartment owner in Edogawa-ku is in the middle of a dispute with the building management association after it was discovered that they plan to convert their apartment into a share house.

The owner and share house company argued that the building association guidelines did not specifically prohibit a share house arrangement, but the association is concerned that the small rooms, some without windows, will pose a fire hazard. Other residents are concerned about noise and other potential problems from overcrowding.

The owner argued that no one should have the right to control what they do within the walls of their apartment.

The building association are considering adding a clause to prohibit future share houses in the building.