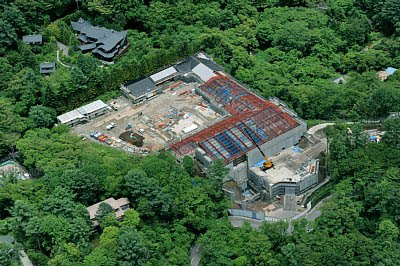 Over the past year rumours have been circulating that Bill Gates is building a large vacation home in Karuizawa’s Sengataki neighbourhood.

An aerial photo of the construction site shows a large building spanning four levels. Reporters who tried to get photos from the driveway were shooed away by security guards, but neighbours said that the billionaire co-founder of Microsoft was the owner.

The 22,000 sqm (236,720 sqft) site is located in Sengataki Nishi-ku, a popular besso (resort home) area that overlooks Karuizawa. The four-storey building has an estimated floor area of between 2000 ~ 3000 sqm (21,520 ~ 32,280 sqft) and construction costs have been estimated at 8 billion Yen (80 million USD). Completion is scheduled for the end of the year. The size eclipses any other residence in Karuizawa, even those held by the Imperial family and Japanese celebrities.

Local gossip runs strong. A taxi driver said that Softbank CEO Masayoshi Son had helped Bill find the land to build on. There are also plenty of rumours about the house itself, including that it will have a private heliport, pool, eight Kyoto-style open air baths (rotemburo), Japanese gardens designed by a Kyoto landscape architect and a private art gallery.

The truth is, none of these stories have been substantiated. The land title shows it currently belongs to a resort developer based in Tokyo, although they could not be contacted. The previous owner, an IT company, could not confirm who they sold the land to. The construction company is Tokyo-based P M Resort – a company run by someone of Chinese descent, which has led to new rumours that the site is owned by a wealthy Chinese person. However, P M Resort was not listed on the building directory at their registered address in Shinbashi.

Not all neighbours are excited about their new neighbour with some complaining about the  constant stream of dump trucks driving past their homes, sometimes out of permissible hours. Other locals are concerned over the razing of the site which has left it devoid of trees.

Karuizawa has approximately 15,000 vacation homes and was a favourite holiday destination of John Lennon. Land prices fell following the Tohoku disaster in 2011, but have since picked up following the rumours of Bill Gates building in the area as other wealthy investors buy in the area to follow in his [rumoured] footsteps.