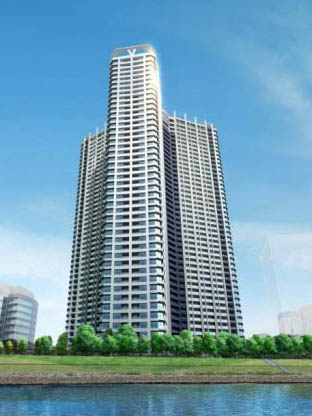 With the total number of new apartments released for sale in May up 50% from last year, and a contract rate of 78.1% in greater Tokyo, there are strong expectations that Abenomics will lead to increased property values.  Major banks increased their 10 year fixed mortgage rates for the second month in a row. With rising interest rates and an expectation of rising real estate prices, buyers are feeling added pressure to purchase.

Normally the summer season is a slow one for apartment sales, but with an expected increase in consumption tax next year the last minute rush from buyers is expected to continue throughout the summer. However, the recent correction in the stock market at the end of May might have cast some doubt over the chance of a prolonged recovery in apartment sales.

One new condominium that could be a barometer of market conditions is Skyz Tower & Garden in Toyosu, Koto-ku. The 44-storey building is being jointly developed by six of Japan’s largest developers, including Mitsui Fudosan Residential and Tokyo Tatemono. Sales of the 1,110 apartments start in July and the building will be completed by mid 2014. Promotional material was sent to over 10,000 interested buyers in September 2012, and over 1500 people attended the information sessions held over a month in Spring.

The real question is how much of this interest will translate into actual sales.

The average sale price in Skyz will be approximately 755,000 Yen per square meter. Although it is only a 5 minute walk from Shin-Toyosu Station on the Yurikamome Line, this line is not very convenient for daily commutes. The second closest station is Toyosu on the Yurakucho Line which is more convenient for those travelling into central Tokyo, but it is a 12 minute walk away. About 18 months ago, new apartments that were 11 minutes from Toyosu Station were priced around 710,000 Yen/sqm – about 6% less than Skyz selling price.

The Toyosu area is expected to see approximately 1,000 new apartments hit the market each year for the next few years.

In the mini-bubble of 2007, a condominium of a similar scope to Skyz was developed by four major developers. The Toyosu Tower contained 825 apartments over 43 stories.

When sales began in 2006, the average price was 870,000 Yen/sqm – almost a third higher than the average of 680,000 Yen/sqm in the area. Although there were some initial buyers, sales soon began to slow down. The final nail in the coffin was the financial crisis in 2008, just before the building was completed.

Nowadays, developers are more cautious as they cannot afford to make the same mistakes.