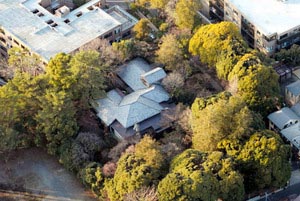 Plans are underway to convert the private residence of a former Prime Minister, Prince Fumimaro Konoe, into a public garden. The local Suginami City is looking into purchasing the 6,000 sqm grounds and converting them into a public garden with a planned opening in 2017.

Named ‘Tekigaiso’, the house was built in a traditional Japanese style in 1927. The total floor area of the house is approximately 500 sqm (5,380 sqft). Prince Konoe purchased the property in 1937. In October 1941, he discussed war efforts in the house’s drawing room with Hideki Tojo, general of the Imperial Japanese Army and Prime Minister from late 1941 to 1944. Konoe later committed suicide in his library in 1945, and Tojo was sentenced to death for Japanese war crimes in 1948.

Until recently, the house was occupied by Konoe’s second son Michitaka, who passed away in February 2012. After his widow moved out, several contractors visited the site to provide quotes on redeveloping the site into apartments.

Local groups found out about the redevelopment plans and fought to preserve the house and gardens, fearing that an apartment building would ruin the character of the neighbourhood. Suginami-ku approached Michitaka’s widow to acquire the property from her. Approximately 3.1 billion Yen (33 million USD) has been put aside in the new year’s budget for the purchase.