Mitsubishi Jisho Residence announced on February 18 that they will be introducing a new series of condominiums targeting the high-end of the market. Called “The Parkhouse Grand” series, they will provide an additional level of luxury to their existing “The Parkhouse” series.

The properties will be in desirable locations within the Yamanote Line in Tokyo. Mitsubishi hopes to create apartments that hold their value over time.

The average apartment will be approximately 100 sqm in size (1076 sqft), which is unusually high for recent developments.

Two or three buildings are scheduled to be built each year, with the first being “The Parkhouse Grand Minamiaoyama Takagicho” in Tokyo’s Minato-ku. Sales in this building begin in Spring and the building is due for completion in March 2014. Some apartments will have their own private hallway, which means you do not have to share the hallway with any other neighbors.

They are also planning to begin sales in “The Parkhouse Grand Sanbancho” near the Imperial Castle in Chiyoda-ku. Although prices have yet to be announced, the majority of apartments are expected to be priced over 100 million Yen (1,070,000 USD) each.

President of Mitsubishi Jisho, Takao Yagihashi, said they have created the new “Grand” series to cater to a growing number of buyers who demand the very best. The apartments may provide some competition to Mitsui Fudosan Residential’s “Park Mansion” series of high-end condominiums.

The Parkhouse Grand Minamiaoyama Takagicho (Update: This building was demolished in 2014 and is currently being rebuilt) 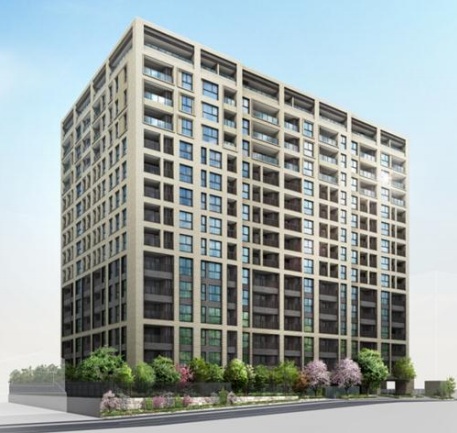