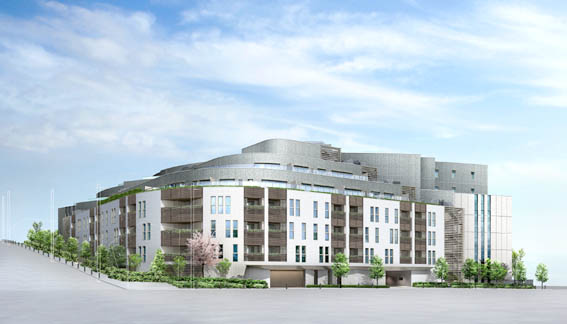 Apartments in Proud Minamiazabu go on sale today. 64 of the 88 units will be available for sale in the first round and prices range from 60.9 to 490 million Yen, with an average price of 1,257,000 Yen/sqm.

So far 800 visitors have inspected the sales office and modelroom, and there have been 6,000 requests for property details from interested parties. The sales team are expecting a same-day sellout.

This project is being built adjacent to the French Embassy in Minamiazabu 4 Chome. The land is being leased under a 60 year fixed-term leasehold which expires in December 2073. Unlike many other fixed leaseholds, at the end of the 60 years the building is simply handed back to the French Embassy and apartment owners will not be liable for any costs in demolishing the building.

Leasehold apartments are typically cheaper than freehold ones, but in the case of Azabudai Parkhouse (1,720,000 Yen/sqm)  and Hiroo Garden Forest (1,240,000 Yen/sqm), they can sometimes cost just as much.

Proud Minamiazabu is a 6 minute walk from Hiroo Station. The 7-storey low-rise condominium has just 88 apartments ranging in size from 69.08 to 192.70 sqm.

Because it is leasehold, apartment owners will have to pay a monthly land rent, as well as an initial payment at the time of purchase.

The project was initially a much more luxurious and exclusive building with just 50 to 60 apartments sized between 160 and 200 sqm, with completion in March 2012. However, the effect of the 2008 Lehman Shock and 2011 Tohoku disaster on the economy led to less extravagant plans. 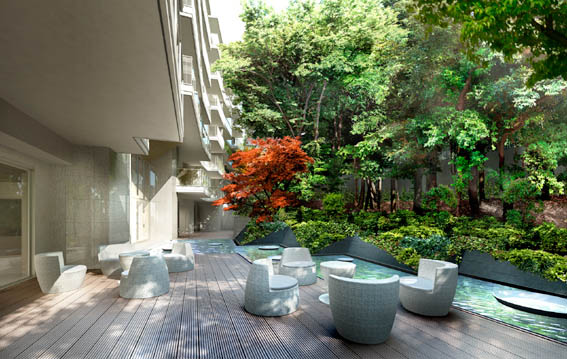 The sales team believe that the green views will compensate for the leasehold aspect. However, the adjacent grounds are private and not accessible to the public or apartment residents. The trees are said to be as high as the building, and with such deep balconies, will the apartments receive much natural light?

The modelroom was based on the 192 sqm apartment priced at 490 million Yen (2,552,000 Yen/sqm). It is a size and quality that is rarely found in new buildings. It also has a 109 sqm rooftop terrace. The bathroom looks out to a conservatory with skylights. Upgrades to the modelroom amount to approximately 80 ~ 90 million Yen. The standard finish in apartments include Sapele hardwood floors and furniture and accents finished in oak.