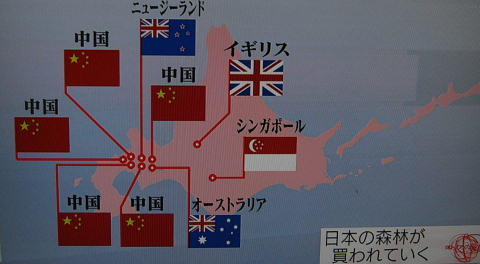 There have been many attention-grabbing headlines about mainland Chinese investors buying up real estate overseas. This was also big news in Japan in 2010 and was the subject of many investigative television reports and newspaper articles speculating about Chinese citizens buying up large tracts of forestry in Japan.

Following the March 11 Tohoku disaster, these stories have almost completely vanished from Japanese newspapers as mainland buyers have re-routed their “hot money” to other international destinations. But was there really a big influx of property investment by land-hungry mainland Chinese to begin with, or was it hype created by overly optimistic real estate agents and conservationists who feared the Chinese buying up their countryside?

A recent article in the Japan Business Press suggests that while interest was high actual transactions by mainland Chinese were miniscule. The ongoing nuclear disaster in Fukushima and the negative outlook for Japan’s economy have led foreign investors to take a cautious ‘wait-and-see’ approach to investing.

Stasia Capital, a Japanese real estate consulting firm, has also opened up operations in Shanghai to consult Chinese buyers on the Japanese real estate market. They reported receiving daily inquiries from interested buyers right up until the day of the March 11 earthquake, but these inquiries stopped completely following the news of the quake.

In Autumn, 2011, consecutive international real estate fairs were held in Shanghai. Real estate companies and developers from across the world attend these fairs to showcase their services and international properties to prospective Chinese buyers.

Stasia Capital attended the 2010 and 2011 fairs. They said that visitors during the 2010 fair were attracted to the booths operated by companies from countries such as America, Canada and Australia – some of which can provide residency to owners of real estate. There were also many visitors to booths advertising luxury Tokyo apartments and Hakone resorts.

However, the interest in the Japanese real estate booths at the 2011 event was lacking. While there were visitors who had been interested in investing in Japanese property for a long time, they were taking a wait-and-see approach. Many of those who did stop by the Japanese booth said they would re-consider conditions in 2012, before rushing over to the European and American booths.

In 2010, the domestic media focused on stories about wealthy Chinese buying up Japan. In reality, the actual investment by mainland Chinese is only a small fraction of total foreign investment in Japan.

According to the Ministry of Land, Infrastructure and Transportation (MLIT)’s 2011 Summary of White Paper on Land, investment in Japanese real estate by mainland Chinese accounted for just 1% of all foreign investment. If investment from Hong Kong is included, the total is 6%. In sharp contrast, the total investment from Europe and America totals over 80%.

The top 3 countries which purchased Japanese real estate in 2010 were:

Despite forming the majority of foreign investment, European and American investment companies purchasing large buildings in central Tokyo has been less newsworthy than the movements of Chinese money. 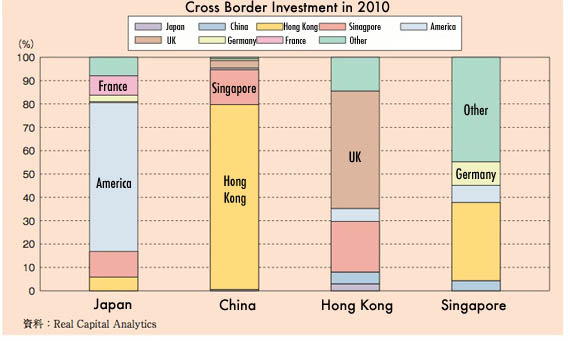 If not Japan, where is the China Money going?

Although there are mainland Chinese who are interested in purchasing Japanese real estate, Japan does not rank highly in the list of countries that Chinese most want to invest in. A recent survey by Soufan, one of China’s largest real estate portals, showed that 50% of Chinese respondents want to invest in America. In second place was Canada with 11.4% and Australia and Singapore tied at third place with 8.6%. Only 5.7% of respondents replied that they would be interested in buying in Japan.

The defining factor is that the top ranking countries can provide permanent residency for foreigners who purchase real estate. A recent report by the Hurun Research Institute and the Bank of China found that 60% of China’s rich were either in the process of emigrating or considering doing so.

What does the future hold?

Although the Chinese are refraining from purchasing real estate in Japan, tourist numbers from mainland China have started to recover. In September, a new multi-entry 3 year visa for Chinese citizens was introduced, which has made it easier for qualified tourists to visit Japan.

However, Japan needs to do more to encourage foreign investment. Borrowing from a bank within Japan is not an option for non-residents. As a general rule, Japanese banks do not provide property finance to foreigners currently residing outside of Japan. The Commonwealth Bank of Australia (CBA) and HSBC both provided mortgages on Japanese real estate to foreigners living abroad, but the CBA abruptly stopped its lending business in late 2010, and HSBC stopped offering loan services in May 2011.

From 2008, the Japanese population began to shrink. As the population declines, so will demand for real estate which will lead to a weakening property prices. This is the time to implement changes that will lure foreign investment and help stimulate the dull economy.

While the Chinese are actively purchasing real estate abroad, Japan is very low on their radar. One of the major reasons for buying real estate overseas is to be eligible for long term visas, something which Japan does not yet offer. Many Japanese agents will say that Japan’s relatively high rental yields are its core advantage, but yields are no higher than those found in the US and Australia. As non-residents do not qualify for Japan’s low 1% mortgages, the net cash flow between borrowing costs and returns is no longer a big sales point.

Furthermore, the strong Yen has increased the comparative price of real estate. If the Yen were to weaken, a foreign owner risks losing a significant portion of their asset’s value. And with almost no chance of capital gain, Japanese real estate appears to be at a competitive disadvantage to other investment-friendly countries.