This is the 7th continuous month of decline following the March 11 Tohoku disaster. The JNTO said that the high yen and ongoing nuclear disaster has kept away wealthy visitors as well as those traveling with children and family.

The number of visitors from South Korea fell by 36.9% and visitors from China fell by 18.0%. Visitors from the USA were down 17.1%. Although the number of Americans visiting for business reasons was showing signs of improving, the high value of the Yen vs. the USD is putting off many American tourists.  The biggest drop was in the number of Australian visitors which fell by 43.8%.

The drop in visitor numbers may improve the chances of the JNTO pushing ahead with their plans to offer free round-trip flights to foreigners as a last-ditched effort to boost tourist numbers.

In contrast, the number of Japanese traveling abroad increased in September by 6.7% to 1,645,000 travelers.

*Please note that “Visitors” includes “Tourists” as well as other travelers, so the actual number of tourists is much lower. The number of foreign tourists to Japan fell 60.6% in March and 81.9% in April, although actual “Visitor” numbers only fell by 50.3% and 62.5%. 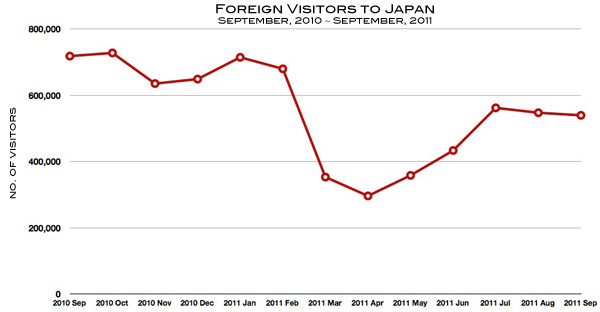 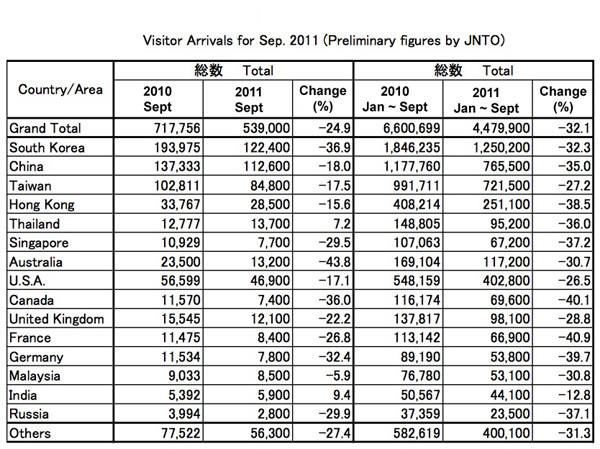